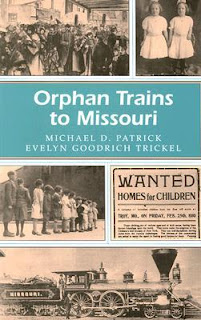 As an "orphan train" crossed the country, it left part of its cargo at each stop, a few children in one small town and a few in another. Even though farmers needed many hands for labor, most of the small farm communities could not or would not take all of the children on the train. As the train moved to its next stop, those children not taken feared no one would ever want them.

Early immigration laws encouraged the poor of Europe to find new hope with new lives in the United States. But sometimes the immigrants exchanged a bad situation in their native country for an even worse one on the streets of New York and other industrial cities. As a result, the streets were filled with crowds of abandoned children that the police called "street arabs." Many New York citizens blamed the street arabs for crime and violence in the city and wanted them placed in orphan homes or prisons.

In 1853 a man by the name of Charles Loring Brace, along with other well-to-do men in New York City, founded the Children's Aid Society. The society planned to give food, lodging, and clothing to homeless children and provide educational and trade opportunities for them. But the number of children needing help was so large that the Children's Aid Society was unable to care for them, and Brace developed a plan to send many of the children to the rural Midwest by train. He was convinced that the children of the streets would find many benefits in rural America. In 1854 he persuaded the board of the society to send the first trainload of orphans west. With this, the orphan trains were born.

Cheap fares, the central location of the state, and numerous small farming towns along the railroad tracks made Missouri the perfect hub for the orphan trains, even though many areas of the state were still largely unsettled. Researchers have estimated that from 150,000 to 400,000 children were sent out on orphan trains, with perhaps as many as 100,000 being placed in Missouri.

Orphan Trains to Missouri documents the history of the children on those Orphan Trainsþtheir struggles, their successes, and their failures. Touching stories of volunteers who oversaw the placement of the orphans as well as stories of the orphans themselves make this a rich record of American and midwestern history.

I chose to read this one because it almost literally jumped off the shelf at the library! I was looking for a book in the next section and this one was stood up on display, practically asking me to knock it off the shelf. Because I love looking at old photos, and because I’d read about orphan trains in both Orphan Train by Christina Baker Kline and The Chaperone by Laura Moriarty, I couldn’t say no.

This book was geared towards ‘adult new readers’ and therefore a quick, easy read — I finished it in just a few hours! If you’ve read Orphan Train you already are aware of a lot of what is contained in this book; how the orphan trains were set up to disperse orphans from New York City into the western regions of the country. I am very glad I read this book, because after reading Orphan Train and The Chaperone I had a pretty negative view of the orphan train concept. After reading this, I can see that the orphan trains were started with very good intentions, and that the man who started them really wanted them to work, but was somewhat naive and uninformed about conditions in the west. I also had been unaware that there was a second system of orphan trains set up by a Catholic organization in New York to serve Catholic orphans.

In addition to facts, there were also several personal stories from adults who had come to Missouri as part of the orphan train project. It was good to learn that while some had negative stories to tell, in general the orphans felt the orphan trains had been a positive in their lives. This was really the start of the development of a foster care system in the US, and like the system today, it could work very well with proper screening of foster families and frequent follow-up by those charged with ensuring the system works, but also could lead to some horrible experiences when the system wasn’t working.

If you have an interest in the orphan train experience, you should definitely pick this one up!