Today I am spotlighting The Unfinished Child by Theresa Shea 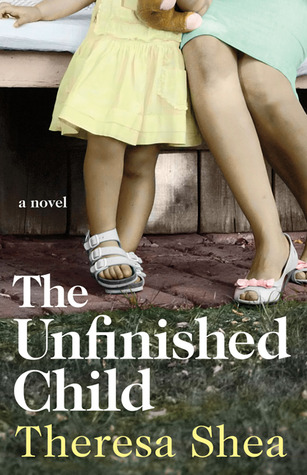 Theresa Shea's first book explores female friendships, prenatal testing, infertility, and Down syndrome. Shea tackles a complex moral issue with great sensitivity. This is a must read not only for parents in the Down syndrome community but for all parents, and for anyone who appreciates masterful story-telling.

When Marie MacPherson, a mother of two, finds herself unexpectedly pregnant at thirty-nine, she feels guilty. Her best friend, Elizabeth, has never been able to conceive, despite years of fertility treatments. Marie's dilemma is further complicated when she becomes convinced something is wrong with her baby. She then enters the world of genetic testing and is entirely unprepared for the decision that lies ahead.

Intertwined throughout the novel is the story of Margaret, who gave birth to a daughter with Down syndrome in 1947, when such infants were defined as "unfinished" children. As the novel shifts back and forth through the decades, the lives of the three women converge, and the story speeds to an unexpected conclusion.

With skill and poise, debut novelist Theresa Shea dramatically explores society's changing views of Down syndrome over the past sixty years. The story offers an unflinching and compassionate history of the treatment of people with Down syndrome and their struggle for basic human rights. Ultimately, The Unfinished Child is an unforgettable and inspiring tale about the mysterious and complex bonds of family, friendship, and motherhood.

Opening Paragraph
At five in the morning, Margaret felt her water break -- as if a crystal had been shattered by a lone, high note. An invisible hand, or perhaps the unborn child’s deft heel, flicked a switch and the floodgate opened. As the warm liquid rushed from her body she moved as quickly as her lumbering figure would allow from her reclined position on the couch, where she’d been elevating her feet to relieve the swelling in her ankles, to a standing position beside it. It’s time, she thought calmly. Finally it’s time.

My Teaser
Four women cried their eyes out for every one who threw a party. She had never won anything in her life, and after years of trying to get pregnant naturally, she wasn’t feeling the least bit lucky.
page 30