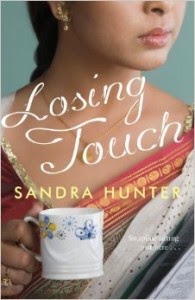 Why did you choose this book? I like reading about different cultures
When did you read this book? June 2014
Who should read this book? readers who are okay with difficult subjects
Source: TLC Book Tours
Here is a synopsis of Losing Touch from TLC Book TOURS

After Indian Independence Arjun brings his family to London, but hopes of a better life rapidly dissipate. His wife Sunila spends all day longing for a nice tea service, his son suddenly hates anything Indian, and his daughter, well, that’s a whole other problem. As he struggles to enforce the values he grew up with, his family eagerly embraces the new. But when Arjun’s right leg suddenly fails him, his sense of imbalance is more than external. Diagnosed with muscular dystrophy, he is forced to question his youthful impatience and careless cruelty to his family, until he learns, ultimately, to love them despite — or because of — their flaws. In a series of tender and touching glimpses into the shared life of a married couple, Sandra Hunter creates strikingly sympathetic characters — ones that remind us of our own shortfalls, successes, hypocrisies, and humanity.

Another wow! I’m not even sure what to say about this one! I liked it very much….I just can’t really put my finger on WHY I liked it. At the surface, it appears to be a very depressing subject. Arjun, the main character, has inherited a degenerative neuromuscular disorder and the story follows his decline. In addition to his health, his family relationships also are in decline. Part one takes place in the 60s, when of course there was a lot of generational discord, so it is not surprising to find that with the teens in the family, everything is not all fun and games. In addition, Arjun’s family has immigrated to London from India, and there is the tension of wanting to hang on to Indian traditions vs adopting western attitudes. This causes a deep enough rift between Arjun and his wife Sunila to put their marriage in jeopardy. But despite these seemingly depressing circumstances, this is not a story of hopelessness.

One thing that really struck me is how the story was told. Arjun’s physical decline was told in the title of each chapter, which for the most part were spaced 13 months apart. I wondered if this was significant because 13 is considered an unlucky number. And though the text did sometimes detail Arjun’s physical decline, the story itself was a story of relationships and family, where the disease was just a background story. Most of the family issues could occur in any family.

This will be a fantastic choice for book clubs, with so much to discuss. And this is a book that begs to be discussed, covering issues of how illness affects family dynamics, communication within a family, racism, and generational conflict among others. Oh, and did I mention, I love the cover?!

Sandra Hunter’s fiction has appeared in a number of literary magazines, and has received three Pushcart Prize nominations. Among other awards, she won the 2013 Women’s Domination Story Competition, 2012 Cobalt Literary Magazine Fiction Prize and the 2011 Arthur Edelstein Short Fiction Prize. Her short story “Blessed Are the Meek” won Glimmer Train’s Spring 2005 Very Short Fiction Award, and is now a chapter in her novel Losing Touch, to be published in July 2014 (OneWorld Publications).