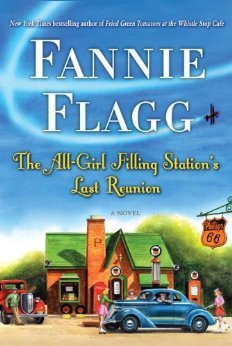 The one and only Fannie Flagg, beloved author of Fried Green Tomatoes at the Whistle Stop Cafe, Can't Wait to Get to Heaven, and I Still Dream About You, is at her hilarious and superb best in this new comic mystery novel about two women who are forced to reimagine who they are.
Mrs. Sookie Poole of Point Clear, Alabama, has just married off the last of her daughters and is looking forward to relaxing and perhaps traveling with her husband, Earle. The only thing left to contend with is her mother, the formidable Lenore Simmons Krackenberry. Lenore may be a lot of fun for other people, but is, for the most part, an overbearing presence for her daughter. Then one day, quite by accident, Sookie discovers a secret about her mother's past that knocks her for a loop and suddenly calls into question everything she ever thought she knew about herself, her family, and her future.
Sookie begins a search for answers that takes her to California, the Midwest, and back in time, to the 1940s, when an irrepressible woman named Fritzi takes on the job of running her family's filling station. Soon truck drivers are changing their routes to fill up at the All-Girl Filling Station. Then, Fritzi sees an opportunity for an even more groundbreaking adventure. As Sookie learns about the adventures of the girls at the All-Girl Filling Station, she finds herself with new inspiration for her own life.
Fabulous, fun-filled, spanning decades and generations, and centered on a little-known aspect of America's twentieth-century story, The All-Girl Filling Station's Last Reunion is another irresistible novel by the remarkable Fannie Flagg.

From the prologue:
In the year 1908 Stanislw Ludic Jurdabralinkski, a tall, rawboned boy of fourteen, was facing a future of uncertainty. Life in Poland under Russian rule was bleak and dangerous. Polish men and boys were being conscripted to serve in the czar’s army, and in an attempt to destroy Polish unity, Catholics and priests had been jailed for anti-Russian sentiments. Churches were shut down and Stanislaw’s father and three uncles had been sent to prison camps for speaking out.
But with encouragement from his older brother Wencent, who had escaped Poland five years earlier, Stanislaw arrived in New York with nothing but the ill-fitting plaid woolen suit he was wearing, a photograph of his mother and sisters, and the promise of a job. With the help of a Polish stevedore who he had befriended on the ship, he managed to hop a freight train.

She ran out on the back porch and started waving her arms and yelling at the top of her lungs, “Go to the front, little birds -- go around to the front! Hurry up, little birds!” But how do you communicate with birds?
page 36