Today I am spotlighting Cancel The Wedding  by Carolyn T. Dingman 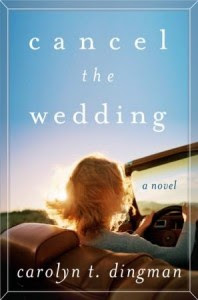 On the surface, Olivia has it all: a high-powered career, a loving family, and a handsome fiancé. She even seems to be coming to terms with her mother Jane’s premature death from cancer. But when Jane’s final wish is revealed, Olivia and her elder sister, Georgia, are mystified. Their mother rarely spoke of her rural Southern hometown, and never went back to visit—so why does she want them to return to Huntley, Georgia, to scatter her ashes?

Jane’s request offers Olivia a temporary escape from the reality she’s long been denying: she hates her “dream” job, and she’s not really sure she wants to marry her groom-to-be. With her fourteen-year-old niece, Logan, riding shotgun, she heads south on a summer road trip looking for answers about her mother.

As Olivia gets to know the town’s inhabitants, she begins to peel back the secrets of her mother’s early life—truths that force her to question her own future. But when Olivia is confronted with a tragedy and finds an opportunity to right a terrible wrong, will it give her the courage to accept her mother’s past—and say yes to her own desire to start over?

The strap from the overloaded canvas satchel dug into Janie’s shoulder as she made her way down the well-traveled path to the river. She could feel that George was already there before she could hear him and long before she could see him. They were only ten years old but they had been tuned in to each other like that for as long as she could remember. As she jumped over one of the small creeks that fed into the river, she glanced at the wild blueberry bushes growing on its small bank. They had all been picked clean, so she didn’t bother to stop.

Janie left the cool shade of the treelined trail and burst into the blazing sunlight on the bank of the water. She was at the Hitch, a bend in the river where the Dunk Pool formed every spring, which was what they called the slow, swirling pond of water that was deep enough for swimming. There were a hundred secret places on this river, and they knew all of them. She had sensed correctly that George was already there jumping off of the Overlook, an enormous granite outcropping over the frigid waters. Janie watched as he jumped high into the air before diving into the water.

I left the candle and note with the woman at the front desk, then went to the bar to get a drink to go. I got back to the room and opened my dinner of Fritos and Pop-Tarts. That covered corn and fruit. And there were limes in my vodka tonic. A well-rounded meal.
page 148