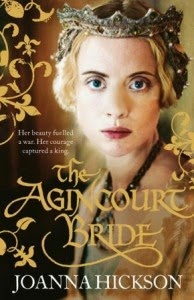 The Agincourt Bride
by Joanna Hickson

Her beauty fuelled a war.
Her courage captured a king.
Her passion would launch the Tudor dynasty.

When her own first child is tragically still-born, the young Mette is pressed into service as a wet-nurse at the court of the mad king, Charles VI of France. Her young charge is the princess, Catherine de Valois, caught up in the turbulence and chaos of life at court.

Mette and the child forge a bond, one that transcends Mette’s lowly position.

But as Catherine approaches womanhood, her unique position seals her fate as a pawn between two powerful dynasties. Her brother, The Dauphin and the dark and sinister, Duke of Burgundy will both use Catherine to further the cause of France.

Catherine is powerless to stop them, but with the French defeat at the Battle of Agincourt, the tables turn and suddenly her currency has never been higher. But can Mette protect Catherine from forces at court who seek to harm her or will her loyalty to Catherine place her in even greater danger?

I admit it got off to a slow start….for about 30 pages! After that I could hardly stop reading! The book is well over 500 pages, but it didn’t feel long at all. In fact, it left me wanting more! I’d met some of these characters in previous reading, but only briefly. Most of what I’ve read has been set in England, so it was interesting to read from the French point of view.

One of the things I enjoyed about this book is the historical detail. It is obvious that the author has has spent time researching this story. I loved reading about the details about the clothing and the court protocol. Even though I knew about arranged marriages, it was really interesting to see how the royal women of the era were basically pawns, used to make alliances with other royal families. It was easy to empathize with Catherine, who really had no choice in who she was to marry, or when. It was also easy to feel the fear her sisters felt as the left the court to be married off very young. I very much appreciated that the author included a family tree at the beginning of the book. As I got to know the characters, it became unnecessary, but at the beginning I was referring to it often. It really helped me to keep the characters straight!

The only negative about this book is that the story ended shortly after Catherine’s marriage to Henry. However, I did learn there is a sequel to be released early next year, The Tudor Bride. I will definitely want to pick that up and continue the story! If you enjoy fiction based on the royal families of Europe, you will want to pick this one up! 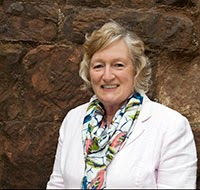 Joanna spent twenty-five years at the BBC writing and presenting for radio and television. Gripped by Shakespeare’s historical plays, Joanna began researching the King Henry V’s ‘fair Kate’ as a schoolgirl and the story of Catherine de Valois and the Tudor genesis has remained with her throughout life. She lives in an old farmhouse in Wiltshire and is married with a large family and a wayward Irish terrier.

This book review is included in a tour by TLC Book Tours. I was provided a copy for review purposes and have written an honest review which appears above.