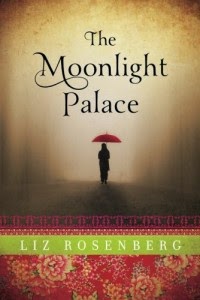 The Moonlight Palace
by Liz Rosenberg

Agnes Hussein, descendant of the last sultan of Singapore and the last surviving member of her immediate family, has grown up among her eccentric relatives in the crumbling Kampong Glam palace, a once-opulent relic given to her family in exchange for handing over Singapore to the British.
Now Agnes is seventeen and her family has fallen into genteel poverty, surviving on her grandfather’s pension and the meager income they receive from a varied cast of boarders. As outside forces conspire to steal the palace out from under them, Agnes struggles to save her family and finds bravery, love, and loyalty in the most unexpected places. The Moonlight Palace is a coming-of-age tale rich with historical detail and unforgettable characters set against the backdrop of dazzling 1920s Singapore.

I will start my review by saying this book read a bit like a memoir, and if you read my blog often, you know I am not big on memoirs. Keep that in mind as you read this review! However, it is actually historical fiction, set in the 1920s in Singapore. A quick google let me know that the Kampong Glam palace was real, as was the Sultan.

The first thing I noticed about this book was that as I read it, I often felt like I was reading a memoir in that I often felt like I was reading a series of random events experienced by the main character, Agnes, that had only a tenuous relationship to other events. I also noticed that I often lost track of the time period, and forgot this wasn’t a contemporary story. Only the occasional mention of bobbed hair and 1920s style clothing reminded me that this story was in the past. Admittedly, if I knew more about Singapore and its history, this might not have been the case.

The book was a quick, easy read, but the story won’t stick with me. Six months from now I might recognize the title and that I read the book, but won’t be able to tell you anything about it. I felt very little connection to the characters, other that British Grandfather, who I did enjoy. I also felt like the story ended a little quickly, with things developing a bit too rapidly, and yet, not knowing what happened ultimately.

While this book fell flat for me, many other reviewers loved it. Be sure to check out others on the tour. If you enjoy coming-of-age stories or memoirs, there is a good chance you will like this book!

Liz Rosenberg is the author of more than thirty award-winning books, including novels and nonfiction for adults, poetry collections, and books for young readers. She has been the recipient of numerous prizes, including the Paterson Prize, the Bank Street Award, the Center for the Book Award, and a Fulbright fellowship in Northern Ireland in 2014. She is a professor of English and creative writing at Binghamton University, in upstate New York, where she has received the Chancellor’s Award for Excellence in Teaching. She has guest-taught all over the United States and abroad, and has written a book column for the Boston Globe for the past twenty-five years. Her previous novels, Home Repair and The Laws of Gravity, have been bestsellers in the United States, Europe, and Canada. She and her husband, David, were raised on Long Island, and went to the same summer camp at ages seven and eight, respectively.