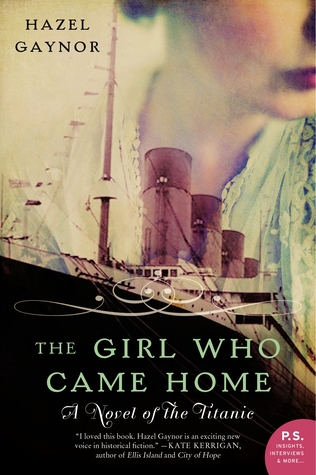 Inspired by true events surrounding a group of Irish emigrants who sailed on the maiden voyage of R.M.S Titanic, The Girl Who Came Home is a story of enduring love and forgiveness, spanning seventy years. It is also the story of the world’s most famous ship, whose tragic legacy continues to captivate our hearts and imaginations one hundred years after she sank to the bottom of the Atlantic ocean with such a devastating loss of life.

In a rural Irish village in April 1912, seventeen-year-old Maggie Murphy is anxious about the trip to America. While the thirteen others she will travel with from her Parish anticipate a life of prosperity and opportunity - including her strict Aunt Kathleen who will be her chaperon for the journey - Maggie is distraught to be leaving Séamus, the man she loves with all her heart. As the carts rumble out of the village, she clutches a packet of love letters in her coat pocket and hopes that Séamus will be able to join her in America soon.

In Southampton, England, Harry Walsh boards Titanic as a Third Class Steward, excited to be working on this magnificent ship. After the final embarkation stop in Ireland, Titanic steams across the Atlantic Ocean. Harry befriends Maggie and her friends from the Irish group; their spirits are high and life on board is much grander than any of them could have ever imagined. Being friendly with Harold Bride, one of the Marconi radio operators, Harry offers to help Maggie send a telegram home to Séamus. But on the evening of April 14th, when Titanic hits an iceberg, Maggie’s message is only partly transmitted, leaving Séamus confused by what he reads.

As the full scale of the disaster unfolds, luck and love will decide the fate of the Irish emigrants and those whose lives they have touched on board the ship. In unimaginable circumstances, Maggie survives, arriving three days later in New York on the rescue ship Carpathia. She has only the nightdress she is wearing, a small case and a borrowed coat, to her name. She doesn’t speak of Titanic again for seventy years.

In Chicago, 1982, twenty-one year old Grace Butler is stunned to learn that her Great Nana Maggie sailed on Titanic and sets out to write Maggie's story as a way to resurrect her journalism career. When it is published, Grace receives a surprising phone call, starting a chain of events which will reveal the whereabouts of Maggie’s missing love letters and the fate of those she sailed with seventy years ago. But it isn't until a final journey back to Ireland that the full extent of Titanic’s secrets are revealed and Maggie is able to finally make peace with her past.

Maggie Murphy stood alone and unnoticed on the doorstep of the thatched stone cottage that three generations of her family had called home. She twirled one of her rich auburn curls around her index finger, the way she always did she she was anxious, and watched as the day she had been dreading dawned in the sky above the distant mountains.

Narrowing her usually wide blue eyes against the glare of the early morning sun, she wrapped her arms around herself for warmth as she quietly observed her friend Peggy Madden. Peggy’s laughter was carried on a light breeze as she vigorously scooped up armful after armful of cherry blossoms and, giggling like a schoolgirl, threw them into the air. The pale pink and white petals cascaded down onto the heads of her cousin Jack and his wife, Mara, whom Peggy had caught kissing under one of the trees a few moments earlier.

“Just like your wedding day, Maura,” she cried. “There’s confetti enough here for all of us to be brides, and then maybe there’ll be some kissing for us too.”

“I wrote my note,” she said, passing the folded page to Harry, feeling awkward at handing over her private words to a relative stranger, few words though they were. “You promise not to read it now will ye, just give it to your friends, so?”
page 147


So...what do you think? Is this one you would pick up? Leave a comment below!