Review: The Witch of Lime Street 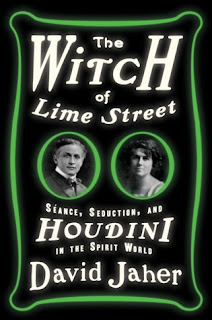 The Witch of Lime Street
by David Jaher

Why did you choose this book? I’ve always been intrigued by Harry Houdini
When did you read this book? January 2016
Who should read this book? readers of paranormal or history
Source: a gift?
Here is a synopsis of The Witch of Lime Street from Goodreads

History comes alive in this textured account of the rivalry between Harry Houdini and the so-called Witch of Lime Street, whose iconic lives intersected at a time when science was on the verge of embracing the paranormal.

The 1920s are famous as the golden age of jazz and glamour, but it was also an era of fevered yearning for communion with the spirit world, after the loss of tens of millions in the First World War and the Spanish-flu epidemic. A desperate search for reunion with dead loved ones precipitated a tidal wave of self-proclaimed psychics—and, as reputable media sought stories on occult phenomena, mediums became celebrities.

Against this backdrop, in 1924, the pretty wife of a distinguished Boston surgeon came to embody the raging national debate over Spiritualism, a movement devoted to communication with the dead. Reporters dubbed her the blonde Witch of Lime Street, but she was known to her followers simply as Margery. Her most vocal advocate was none other than Sherlock Holmes' creator Sir Arthur Conan Doyle, who believed so thoroughly in Margery's powers that he urged her to enter a controversial contest, sponsored by Scientific American and offering a large cash prize to the first medium declared authentic by its impressive five-man investigative committee.  Admired for both her exceptional charm and her dazzling effects, Margery was the best hope for the psychic practice to be empirically verified.  Her supernatural gifts beguiled four of the judges. There was only one left to convince...the acclaimed escape artist, Harry Houdini.

David Jaher's extraordinary debut culminates in the showdown between Houdini, a relentless unmasker of charlatans, and Margery, the nation's most credible spirit medium. The Witch of Lime Street, the first book to capture their electric public rivalry and the competition that brought them into each other’s orbit, returns us to an oft-mythologized era to deepen our understanding of its history, all while igniting our imagination and engaging with the timeless question: Is there life after death?

I’m not sure where I got this book; I probably entered a contest or two. I only know that shortly before Christmas it showed up on my doorstep, and the next day the audio version also showed up on my doorstep. I definitely wanted to read this one, because I have been a fan of Houdini ever since I was a small child and saw an old black & white movie about Houdini. (The full title of this book is The Witch of Lime Street: Séance, Seduction, and Houdini in the Spirit World). If the Houdini connection weren’t enough, the fact that this was a historical account of the age of Spiritualism made it a definite addition to my reading list. Last fall I’d read In the Shadow of Blackbirds by Cat Winters, which was historical fiction set in the same time period and also dealt with mediums and spirits.

This was a long and well researched book. At times it almost became tedious with all the detail. However, the chapters were very short and it was easy to read a bit and then set it aside. I have to admit that about halfway through the book I set it aside, not to DNF it, but because I needed to take a break and read something lighter. I did pick it up and again and finished it relatively quickly after that. I learned quite a bit about Houdini and his life, as well as about the age of Spiritualism. I’d read in In the Shadow of Blackbirds about the contest promising an award to anyone who could produce an authentic ‘spirit picture’ but I had no idea that the contest was not fictional. Scientific American not only sponsored this contest, but also one that would award anyone who could prove he or she was truly a medium! One thing I do wish is that this book would have had notes in the back citing sources and giving background information, similar to the style Erik Larson uses in The Devil In The White City. However as the author stated, this would have easily doubled the size of the book!

One fun feature of the book is the book jacket. I didn’t discover this until one night when I set the book on my desk and turned off the light to head off to bed — and the cover GLOWED IN THE DARK! I thought that was a fun feature! I even purposely ‘charged’ it at times, just so I could see it glow! Here is a photo, but it doesn’t really do the cover justice. 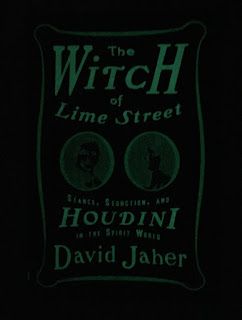 If you enjoy history and are curious about spiritualism, pick this one up!
My Rating: ✰✰✰✰    4 Stars