Review: He Will Be My Ruin 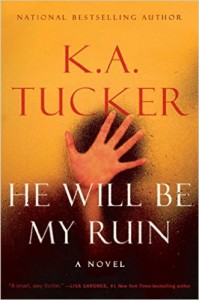 He Will Be My Ruin
by K.A. Tucker

Why I chose this book? This sounded like a good mystery
When I read this book? May 2016
Who should read this book? readers of suspense and mysteries
Source: TLC Book Tours
Here is a synopsis of He Will Be My Ruin from Goodreads

The USA TODAY bestselling author of the Ten Tiny Breaths and Burying Water series makes her romantic thriller debut with this heartpounding story of a young woman determined to find justice after her best friend’s death, a story pulsing with the “intense, hot, emotional” (Colleen Hoover) writing that exhilarates her legions of fans.

Twenty-eight-year-old Maggie Sparkes arrives in New York City to pack up what’s left of her best friend’s belongings after a suicide that has left everyone stunned. The police have deemed the evidence conclusive: Celine got into bed, downed a bottle of Xanax and a handle of Maker’s Mark, and never woke up. But when Maggie discovers secrets in the childhood lock box hidden in Celine’s apartment, she begins asking questions. Questions about the man Celine fell in love with. The man she never told anyone about, not even Maggie. The man who Celine herself claimed would be her ruin.

On the hunt for answers that will force the police to reopen the case, Maggie uncovers more than she bargained for about Celine’s private life—and inadvertently puts herself on the radar of a killer who will stop at nothing to keep his crimes undiscovered.

I don’t read a lot of mysteries but when they are well-written, they are a nice change of pace. This one fit the bill!

Maggie is an heiress who has learned that her best friend, Celine, was found dead in bed with a lethal mixture of drugs and alcohol found alongside. Celine’s terminally ill mother, who has been a second mother to Maggie, has asked Maggie to take care of cleaning out Celine’s apartment and settling her affairs. An unbelieving Maggie is unwilling to accept that her friend has committed suicide, and even though the police investigator is patient in explaining that the loved ones of suicide victims often feel it is murder instead. Maggie does not let it drop. She hires a private investigator! And of course, Maggie can’t let him do all the work, makes some bad decisions, and gets herself into some dicey situations.

And on it goes!

This was a quick and entertaining read. It is perfect for a lazy summer day in your favorite reading spot! You may even just finish in one sitting. Enjoy! 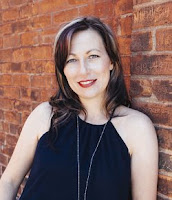 K.A. Tucker is the author of the Ten Tiny Breaths and the Burying Water series. She currently resides outside of Toronto with her husband, two beautiful girls, and an exhausting brood of four-legged creatures.

Connect with K. A. Tucker

Email ThisBlogThis!Share to TwitterShare to FacebookShare to Pinterest
Labels: book tour, He Will Be My Ruin, KA Tucker, review, TLC Book Tour