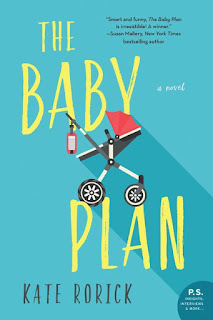 The Baby Plan
by Kate Rorick

Here is a synopsis of The Baby Plan from TLC Book Tours
• Paperback: 432 pages
• Publisher: William Morrow Paperbacks (March 20, 2018)
“Smart and funny, The Baby Plan is irresistible! A winner.” -Susan Mallery, #1 New York Times bestselling author
In The Lizzie Bennet Diaries creator Kate Rorick’s first adult fiction novel, we enter the wild, bewildering world of modern pregnancies. You’ll laugh, you’ll cry, you’ll shake your head as you wonder where everyone’s sanity went…
Meet the mothers…
Nathalie Kneller: Nathalie’s plan: to announce her pregnancy now that she’s finally made it past twelve weeks! But just as she’s about to deliver (so to speak) the big news to her family, her scene-stealing sister barfs all over the Thanksgiving centerpiece. Yup, Lyndi’s pregnant too, swiping the spotlight once more…
Lyndi Kneller:  Lyndi’s plan: finally get her life together! She’s got a new apartment, new promotion, new boyfriend. What she didn’t count on—a new baby! She can barely afford her rent, much less a state-of-the-art stroller…
Sophia Nunez: Sophia’s plan: Once she gets her daughter Maisey off to college, she’ll finally be able to enjoy life as make-up artist to one of Hollywood’s biggest stars, and girlfriend to one of rock’s hottest musicians. But after 18 years she discovers the stork is once again on its way…
Now these women are about to jump headlong into the world of modern day pregnancy. It’s a world of over the top gender reveal parties (with tacky cakes and fireworks); where every morsel you eat is scrutinized and discussed; where baby names are crowd-sourced and sonograms are Facebook-shared. And where nothing goes as planned…

When I read the synopsis on this one, it sounded like a quick, fun read. It was, and that was good for me, because I’d just come off a read that was not light or fun. I needed this break.

This tells the story of three women who are at different stages of their life and have just learned they are pregnant. Nathalie is very excited; she’s been waiting for this for years and can’t wait to let everyone know! Her ‘baby’ sister, Lyndi, is also excited, but in a low-key kind of way. She is caught off guard, as she is young and single and struggling making a living. Sophia is not by any means old, but she is an experienced mother of a senior in high school and ready to send that senior on to college. This pregnancy will mean she is starting over again!

Though much of what happens in the story is pretty predicatable, I really did enjoy the book! The women were apprehensive at times, and had situations thrown at them they didn’t expect. But this is a happy story and everything works out at the end, though I wish there would have been a bit more closure for the Sophia and Lyndi stories. Lyndi’s story in particular felt a little rushed at the end.

I also have to say, I was a little misled by the synopsis. Going into the story, I thought we were going to see that Nathalie had it all together, watching out for little sister Lyndi, who, I was led to believe after reading the synopsis, a bit immature and self-centered. Actually, Lyndi seemed in many ways to be the level-headed sister, able to roll with the punches. Nathalie, on the contrary was getting on my last nerve. She was whiny, self-centered, and unable to cope easily when issues arose—and of course she thought SHE was the better sister, always talking down to Lyndi. Nathalie had her plans, and woe to anyone who interfered or didn’t pay proper deference to her and her pregnancy! Think Bridezilla, but with babies. She also held a deep grudge against her stepmother, though I never quite understood why other than that she wasn’t her REAL mother, who had died when Nathalie was a young girl. And her stepmother, though annoying at times, really tried! During one conversation Nathalie reminded me of Lizzie Borden in The Murderer’s Maid and Lizzie’s feelings towards her stepmother.

Despite my feelings towards Nathalie, I really did enjoy the story, This is a great one to pick up when you need a quick, light read; maybe on those warm spring days coming up, or your next trip to the beach! It could also make a good pick for book clubs who are looking for a lighter read that still has discussion value. Some of the possible topics of discussion include stepmother - stepchild relationships and sibling rivalry, or just reminiscing over pregnancies and sharing ‘war stories’ of delivery.

Kate Rorick is an Emmy Award–winning writer who has worked on a number of television shows, most recently The Librarians on TNT. She was also a writer for the hit web series The Lizzie Bennet Diaries, and authored the two series tie-in novels, The Secret Diary of Lizzie Bennet and The Epic Adventures of Lydia Bennet. In her other life, she writes bestselling historical romance novels under the name Kate Noble. Kate lives in Los Angeles with her family.