Today I am spotlighting Orphan Train by Christine Baker Kline. 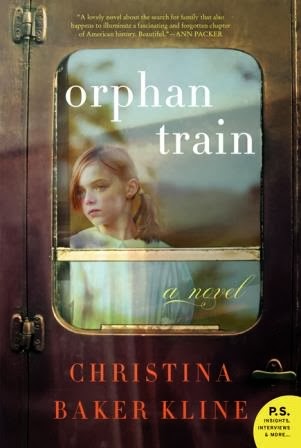 Between 1854 and 1929, so-called orphan trains ran regularly from the cities of the East Coast to the farmlands of the Midwest, carrying thousands of abandoned children whose fates would be determined by pure luck. Would they be adopted by a kind and loving family, or would they face a childhood and adolescence of hard labor and servitude?

As a young Irish immigrant, Vivian Daly was one such child, sent by rail from New York City to an uncertain future a world away. Returning east later in life, Vivian leads a quiet, peaceful existence on the coast of Maine, the memories of her upbringing rendered a hazy blur. But in her attic, hidden in trunks, are vestiges of a turbulent past.

Seventeen-year-old Molly Ayer knows that a community-service position helping an elderly widow clean out her attic is the only thing keeping her out of juvenile hall. But as Molly helps Vivian sort through her keepsakes and possessions, she discovers that she and Vivian aren’t as different as they appear. A Penobscot Indian who has spent her youth in and out of foster homes, Molly is also an outsider being raised by strangers, and she, too, has unanswered questions about the past.

Moving between contemporary Maine and Depression-era Minnesota, Orphan Train is a powerful tale of upheaval and resilience, second chances, and unexpected friendship.

Opening Paragraph
I believe in ghosts. They’re the ones that haunt us, the ones who have left us behind. Many times in my life I have felt them around me, observing, witnessing, when no one in the living world knew or cared what happened.
I am ninety-one years old, and almost everyone who was once in my life is now a ghost.

My Teaser
The morning that we arrived in New York harbor was so foggy and overcast that though my brothers and I stood at the railing, squinting into the drizzle, we could barely make out the ghostly form of the Statue of Liberty a short distance from the docks. We were herded into long lines to be inspected, interrogated, stamped, and then set loose among hundreds of other immigrants, speaking languages that sounded to my ears like the braying of farm animals.
page 25 of 271