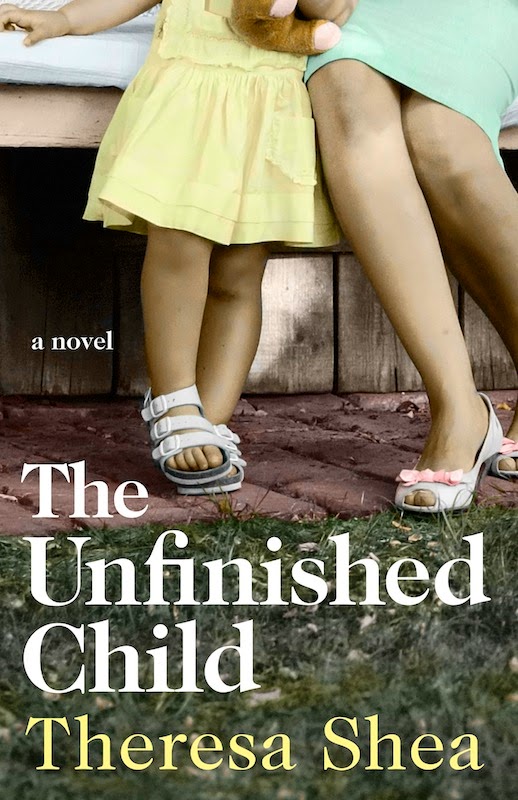 The Unfinished Child
by Theresa Shea

Why did you choose this book? The story sounded interesting and I like the cover
When did you read this book? April 2014
Who should read this book? readers of women’s fiction who don’t mind a tough situation
Source: TLCBookTours.com
Here is a synopsis of The Unfinished Child from TLC Book Tours

When Marie MacPherson, a mother of two, finds herself unexpectedly pregnant at thirty-nine, she feels guilty. Her best friend, Elizabeth, has never been able to conceive, despite years of fertility treatments. Marie’s dilemma is further complicated when she becomes convinced something is wrong with her baby. She then enters the world of genetic testing and is entirely unprepared for the decision that lies ahead.

Intertwined throughout the novel is the story of Margaret, who gave birth to a daughter with Down syndrome in 1947, when such infants were defined as “unfinished” children. As the novel shifts back and forth through the decades, the lives of the three women converge, and the story speeds to an unexpected conclusion.

With skill and poise, debut novelist Theresa Shea dramatically explores society’s changing views of Down syndrome over the past sixty years. The story offers an unflinching and compassionate history of the treatment of people with Down syndrome and their struggle for basic human rights. Ultimately, The Unfinished Child is an unforgettable and inspiring tale about the mysterious and complex bonds of family, friendship, and motherhood.

WOW! This was an amazing read! I can’t say enough about this one! I really wanted to read this one because I’ve known several parents of children with Downs Syndrome. I thought the book did a really nice job of taking us through the evolution of attitudes towards children with Downs. When Margaret had her daughter, the children carried the label ‘mongoloids’ and locked away in an institution. Parents were discouraged from visiting or having any sort of relationship with their child. Basically, the parents were advised to ‘leave them with us and move on with your life’. This attitude existed even as late as the early 80s! I was really surprised to see no mention of money or charge to the parents for the child to be institutionalized. They really were expected to just forget they had a child in an institution.

Contrast that with the attitudes today; that though these children may present challenges for the parents, both financially and physically, they have much to offer, and can learn and function to a much greater degree than was believed in the 40s. But as we learn from Marie’s experience, these challenges are more than parents are sometimes willing to undertake. In the case of Marie, she had a ‘surprise’ pregnancy as an older mom. She learned there are many options for testing, but this presents challenges also. The test itself can cause complications and put the baby in danger, so Marie must decide if it is a risk she is willing to take. And if she does go through with the testing, and the baby turns out to have Downs or other problems, is she willing to carry the baby or will she abort the pregnancy?

Marie also has a friend, Elizabeth, who has been her best friend for many years. Elizabeth has fertility issues and has been trying to have a baby for many years. This makes it difficult for her to relate to Marie’s fears about an ‘imperfect’ baby. Their friendship is tested when the women can’t relate to how the other feels.

I loved how everything fell into place. There were parts I’d predicted early on and was happy to learn I was right, but other things I never would have guessed. While I can’t say I was totally satisfied with the ending, I thought it was a good ending. But as I often say, I would like to have seen an epilogue; to know what happened 5 - 10 years down the road.

This will be a fantastic selection for book clubs. There is so much to discuss! However, if you have members who have strong feelings about abortion or have a Downs child in their family, this may be one to avoid.

Theresa Shea is a mother, novelist, freelance writer, and university lecturer. Her debut novel, The Unfinished Child, was published to favorable reviews in the spring of 2013 by Brindle & Glass.
Born in Silver Spring, Maryland, Shea has lived in Virginia, Japan, Minnesota, and Illinois. In 1977 she moved to Canada and settled in Edmonton before moving to Jasper, Montreal, Kingston, and Gibsons Landing, on British Columbia’s beautiful Sunshine Coast. However, the magnetic North keeps drawing her back, and she currently lives in Edmonton, Alberta again with her husband, three homeschooled children, and one golden retriever.
Shea attended McGill University (BA), Queen’s University (MA), and the University of Alberta (Ph.D.). The Unfinished Child draws on her experience of coming to motherhood later in life, at the age of 35, and being caught off guard by genetic counseling, prenatal testing, and the culture of fear surrounding pregnancy.
Currently, she is working on her second book, a novel set in Washington D.C. that deals with the civil rights movement in the 1960s.
Learn more about Theresa and her work at theresashea.com, on Facebook, or on Twitter.