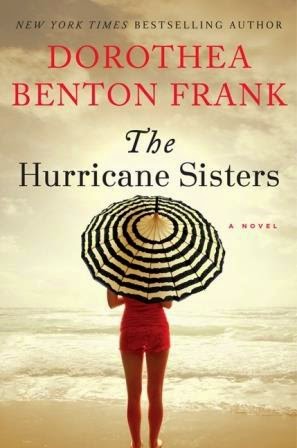 Why did you choose this book? I’ve heard great things about the author
When did you read this book? May 2014
Who should read this book? readers looking for an easy-paced but interesting summer read
Source: TLC Book Tours
Here is a synopsis of The Hurricane Sisters from TLC Book TOURS

Hurricane season begins early and rumbles all summer long, well into September. Often people’s lives reflect the weather and The Hurricane Sisters is just such a story.

Once again Dorothea Benton Frank takes us deep into the heart of her magical South Carolina Lowcountry on a tumultuous journey filled with longings, disappointments, and, finally, a road toward happiness that is hard earned. There we meet three generations of women buried in secrets. The determined matriarch, Maisie Pringle, at eighty, is a force to be reckoned with because she will have the final word on everything, especially when she’s dead wrong. Her daughter, Liz, is caught up in the classic maelstrom of being middle-age and in an emotionally demanding career that will eventually open all their eyes to a terrible truth. And Liz’s beautiful twenty-something daughter, Ashley, whose dreamy ambitions of her unlikely future keeps them all at odds.

Luckily for Ashley, her wonderful older brother, Ivy, is her fierce champion but he can only do so much from San Francisco where he resides with his partner. And Mary Beth, her dearest friend, tries to have her back but even she can’t talk headstrong Ashley out of a relationship with an ambitious politician who seems slightly too old for her.

Actually, Ashley and Mary Beth have yet to launch themselves into solvency. Their prospects seem bleak. So while they wait for the world to discover them and deliver them from a ramen-based existence, they placate themselves with a hare-brained scheme to make money but one that threatens to land them in huge trouble with the authorities.

So where is Clayton, Liz’s husband? He seems more distracted than usual. Ashley desperately needs her father’s love and attention but what kind of a parent can he be to Ashley with one foot in Manhattan and the other one planted in indiscretion? And Liz, who’s an expert in the field of troubled domestic life, refuses to acknowledge Ashley’s precarious situation. Who’s in charge of this family? The wake-up call is about to arrive.

The Lowcountry has endured its share of war and bloodshed like the rest of the South, but this storm season we watch Maisie, Liz, Ashley, and Mary Beth deal with challenges that demand they face the truth about themselves. After a terrible confrontation they are forced to rise to forgiveness, but can they establish a new order for the future of them all?

Frank, with her hallmark scintillating wit and crisp insight, captures how a complex family of disparate characters and their close friends can overcome anything through the power of love and reconciliation. This is the often hilarious, sometimes sobering, but always entertaining story of how these unforgettable women becameThe Hurricane Sisters.

I really enjoyed this book. It has a relaxed pace, perfect for a summer read, but is hard to put down once you get started. As you probably picked up on from the synopsis, this is a slightly dysfunctional family. But unlike the dysfunctional families we often meet in fiction, these members of this family are all flawed, but likeable despite their flaws. I connected with all of the characters, but particularly enjoyed Maisie, the octogenarian matriarch who used her ‘crazy’ to seek attention and let everyone know she was still a force to be reckoned with. I also liked Ivey, the gay son, who seemed to be the most level-headed, rational member of the family who served as advisor and general problem-solver for the family.

The story is told by the women of the family, alternating their points of view between chapters, with Clayton, occasionally chiming in with his side of the story. This method of writing worked well for me. It was interesting to see the same event through the eyes of the different characters and understand why they thought as they did. One thing I would have liked, however, was to get a little more of Ivey’s point of view in the story, as he seemed to be the most objective thinker in the book.

Though a relatively light read, the book takes on some serious issues, including adultery, domestic abuse, and date rape. This will be an excellent selection for book clubs, pleasing both members who value an easy-to-read, entertaining story, as well as members who want fodder for discussion.