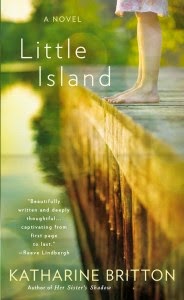 Why did you choose this book? I like the cover
When did you read this book? May 2014
Who should read this book? readers who are looking for a good story about family drama
Source: TLC Book Tours
Here is a synopsis of Little Island from TLC Book TOURS

Grace
Flowers
By the water
Have fun!

These are Grace’s mother’s last words – left behind on a note. A note that Grace interprets as instructions for her memorial service. And so her far-flung clan will gather at their inn on Little Island, Maine, to honor her.

Twenty years ago, a tragedy nearly destroyed the Little family – and still defines them. Grace, her husband Gar, and their three grown children, Joy, Roger and Tamar each played a role in what transpired. But this weekend, they will discover that there is more than pain and heartbreak that binds their family together, when a few simple words lift the fog and reveal what truly matters.

This is a hard one for me to rate because my opinion changed significantly as I read further into the book. This story takes place on Little Island, named not because it is a small island, but because the Little family lives on the Island. The Little family is gathering for a memorial service being held to honor the recently passed grandmother, Joan. As the family gathered and I met each character, I didn’t find a likeable one in the entire family, although the parents, Grace and Gar, were tolerable. But Joy, the oldest, was a whiner; Roger, one of the grown twins, was immature and irresponsible, and Tamar, in the words of her twin brother, was “”! If I’d finished the book feeling this way, giving 2 stars would have been generous.

Luckily for me, as I got to know the background story, my opinion of the characters changed. I found out I had misjudged some of the characters (Roger) and others showed quite a bit of growth (Tamar, I’m talking to you!). In the end, I did like the book quite a bit. It is a story of growth and family dynamics, and shows how a secret can affect these dynamics.

There were a couple of things in the story that I didn’t like; in fact, they really annoyed me! There were two little girls in the family, the eight year old twins of Tamar, and five adults….and NO ONE was aware of where these kids were or what they were doing at times! It was part of the story and part of who these adults were, so this isn’t a criticism of the book; it is just one more reason why I found it so hard to like these characters. Another thing that left me wondering is that Joy’s older son left for college the SAME DAY she drove up for a memorial service for his great-grandmother! I guess I’m not understanding why he couldn’t have attended the memorial and THEN gone on to college. But this is a minor detail and didn’t affect the story.

This would made a great book club selection! There are discussion questions included in the book, but I really think a book club will find plenty to discuss here even without these questions. (Like why a kid doesn’t attend his great-grandmother’s memorial service!) 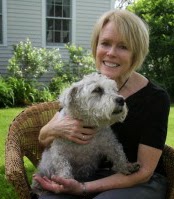 Katharine Britton has a Master’s degree in Creative Writing from Dartmouth College, and a Master’s in Education from the University of Vermont. Her screenplay, “Goodbye Don’t Mean Gone,” was a Moondance Film Festival winner and a finalist in the New England Women in Film and Television contest. Katharine is a member of the League of Vermont Writers, New England Independent Booksellers Association, and The New Hampshire Writer’s Project. She has taught at Institute for Lifelong Education at Dartmouth, Colby-Sawyer College, and The Writer’s Center in White River Junction.
When not at her desk, Katharine can often be found in her Norwich garden, waging a non-toxic war against the slugs, snails, deer, woodchucks, chipmunks, moles, voles, and beetles with whom she shares her yard. Katharine’s defense consists mainly of hand-wringing, after the fact.
Katharine’s first novel HER SISTER’S SHADOW was published in 2011 by Berkley Books (Penguin, USA).  LITTLE ISLAND is her second novel. She is currently working on another manuscript.
Connect with Katharine:
Website | Facebook | Pinterest | Twitter

Below is an inteview with the author, including a reading from Little Island.