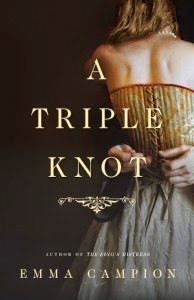 A Triple Knot
by Emma Campion

Joan of Kent, the renowned beauty and niece of King Edward III, seems blessed with a life of royal privilege until her father is executed for treason and she becomes a ward of the king, living amongst those who deem her the daughter of a traitor. Joan begins to understand the brutal constraints and dangers inherent in being of royal blood. There is one at court who loves her, but his love proves the greatest threat of all.
As an impetuous teenager, she escapes into a clandestine marriage in a bid for freedom, then must hide it for nearly a decade, as her guardians marry her off to another man. After her first husband’s death, Joan—now a mother of four—enters into another scandalous relationship, this time with the heir to the British throne, Prince Edward, hero of Crécy and Poitiers, who has loved her all along. But his devotion comes at a terrible price. Haunted by nightmares of her father’s execution and the ruthlessness of her royal kin, Joan must reconcile her passion for the crown prince with her own conscience.

I enjoy historical fiction involving England and royalty but hadn’t read any for awhile, so as soon as I started this one, I felt like I was relaxing with an old friend. The last stories I’d read from this specific genre we centered around the War of Roses, which was new to me at the time. I’ve gone back about one hundred years further with this book, which is set in the mid-1300s.

The first thing I should tell you about this book is that it is a long one, running about 465 pages. This is not a problem unless you are in the mood for a light, quick read. For the most part, I enjoyed this book, though it did drag a bit at times. Telling the story in about 400 pages would have been better.

I also have to mention that I felt a little mislead by the blurb on the cover. When I read it, the implication was that much of this book is based on the period during which Joan ‘enters into a scandalous relationship’ with Prince Edward. That actually happens very near the end of the book, and we don’t learn much about this relationship at all. I really would have liked to seen more detail about this period, though that would have made the book even longer. The good news is, the author is in the early stages of a sequel to tell this part of Joan’s story!

That said, I enjoyed the book very much. I really didn’t know anything about Joan of Kent, so this was new territory for me. One reason I enjoy historical fiction is because it motivates me to learn more about the period covered. I couldn’t wait to hit Wikipedia when I finished to learn more about Joan of Kent and her Black Prince! I really appreciated the author’s note at the end where she clarified what was fact and what was left to her imagination. She also made a point of explaining how different words had different meanings in the 1300s than they do today (ie. clandestine), which added a lot to my understanding of the events. If you have the time to invest and you enjoy historical fiction, this is a very good read!

Emma Campion is the author of The King’s Mistress and, writing as Candace Robb, author of the internationally acclaimed Owen Archer crime series. She lives in Seattle. Visit her blog HERE.

Below is an interview of Candace Robb aka Emma Campion discussing writing.