Review: All I Know and Love 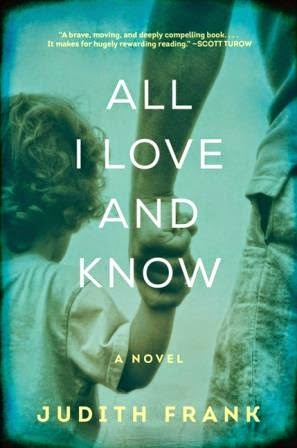 All I Know and Love
by Judith Frank

Why did you choose this book? the synopsis intrigued me
When did you read this book? July 2014
Who should read this book? readers looking for some family drama and difficult situations
Source: TLC Book Tours
Here is a synopsis of All I Know and Love from TLC Book TOURS

With the storytelling power of Wally Lamb and the emotional fidelity of Lorrie Moore, this is the searing drama of an American family on the brink of dissolution, one that explores adoption, gay marriage, and true love lost and found

For years, Matthew Greene and Daniel Rosen have enjoyed a contented domestic life in Northampton, Massachusetts. Opposites in many ways, they have grown together and made their relationship work. But when they learn that Daniel’s twin brother and sister-in-law have been killed in a Jerusalem bombing, their lives are suddenly, utterly transformed.

The deceased couple have left behind two young children, and their shocked and grieving families must decide who will raise six-year-old Gal and baby Noam. When it becomes clear that Daniel’s brother and sister-in-law had wanted Matt and Daniel to be the children’s guardians, the two men find themselves confronted by challenges that strike at the heart of their relationship. What is Matt’s place in an extended family that does not completely accept him or the commitment he and Daniel have made? How do Daniel’s complex feelings about Israel and this act of terror affect his ability to recover from his brother’s death? And what kind of parents can these two men really be to children who have lost so much?

The impact that this instant new family has on Matt, Daniel, and their relationship is subtle and heartbreaking, yet not without glimmers of hope. They must learn to reinvent and redefine their bond in profound, sometimes painful ways. How does a family become strong enough to stay together and endure when its very basis has drastically changed? And are there limits to honesty or commitment—or love?

This book is hard for me to rate because I really struggled to read it. I went into the book expecting a story centered around a custody battle, with much hinging on the fact that the battle involved a gay couple. In truth, custody played a very minor role in the story, and was settled very early on.

Instead, the book was very much character-driven and I felt like I had a book that wasn’t quite sure what it wanted to be. Is it a book that is trying to show that gay parenting is a valid option, or that a gay relationship can be as loving, but complicated as a straight relationship? Is it a book that want to show us the flaws in Israel’s policies towards the Palestinians, or the emotional difficulties of Holocaust survivors? Is it a love story? Or a story of family and relationships? Maybe a story of coping with grief? All of these issues are touched upon in the book, some in more detail than others, but not always very effectively. Much of the time, I felt like I was just plowing through the book to get it done and never really finding the story!

Even though I don’t feel like a lot of these issues were covered in detail (and others in far too much detail) I do feel like a book club could have a great time with this book. The book touched on so many issues that clubs would have a diversity of feelings about, whether or not they all enjoyed the book. . Some of the best book club discussions I’ve had have been based on books that had mixed reviews!

Just to warn, some of the scenes in the book are graphic, both love scenes and scenes of violence, and this may make some readers uncomfortable. But if you don’t mind this, and you are looking for a story with character development and good discussion material, this may be the book for you! Be sure to follow the book tour to learn how others see the book.

Judith Frank is a professor of English at Amherst College. She received a B.A. from Hebrew University in Jerusalem and a Ph.D. in English literature and an M.F.A. in creative writing from Cornell. She was the recipient of a grant from the National Endowment of the Arts, has held residencies at Yaddo and MacDowell, and is the author of a previous novel, Crybaby Butch. She lives in Massachusetts with her partner and two children.


Below is a clip of the author introducing her book.