Tuesday Memes: The Girl With A Clock For A Heart 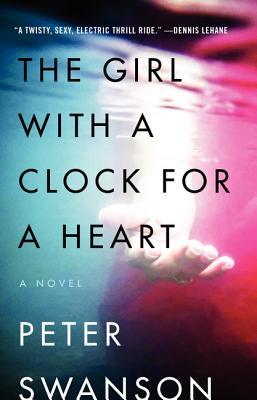 George Foss never thought he'd see her again, but on a late-August night in Boston, there she is, in his local bar, Jack's Tavern.

When George first met her, she was an eighteen-year-old college freshman from Sweetgum, Florida. She and George became inseparable in their first fall semester, so George was devastated when he got the news that she had committed suicide over Christmas break. But, as he stood in the living room of the girl's grieving parents, he realized the girl in the photo on their mantelpiece - the one who had committed suicide - was not his girlfriend. Later, he discovered the true identity of the girl he had loved - and of the things she may have done to escape her past.

Now, twenty years later, she's back, and she's telling George that he's the only one who can help her...

It was dusk, but as he turned onto the rutted driveway he could make out the perimeter of yellow tape that still circled the property.

George parked his Saab, but left the engine running. He tried not to think about the last time he’d been to this almost-hidden house on a dead-end road in New Essex.

The police tape was strung in a wide circle, from pine tree to pine tree, and the front door was plastered with red and white tape in an X pattern. He turned off the engine. The air conditioner stopped blowing, and George almost immediately felt the smothering heat of the day. The sun was low in the sky, and the heavy canopy of pine trees made it seem even darker.

He stepped out of the car. The humid air smelled of the sea, and he could hear gulls in the distance. The dark brown deckhouse blended into the woods that surrounded it. Its tall windows were as dark as its stained siding.

He ducked under the yellow tape that declared POLICE LINE DO NOT CROSS and made his way toward the back of the house. He was hoping to get in through the sliding-glass doors that opened into the house from the rotted back deck. If they were locked, he would throw a rock through the glass. His plan was to get inside the house and search it as quickly as possible, looking for evidence the police might have missed.

Email ThisBlogThis!Share to TwitterShare to FacebookShare to Pinterest
Labels: meme, Peter Swanson, The Girl With The Clock For A Heart, tuesday meme