Review: In The Language of Miracles 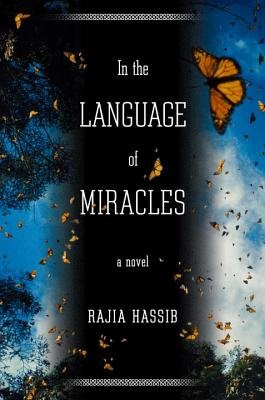 In The Language Of Miracles
by Rajia Hassib

Samir and Nagla Al-Menshawy appear to have attained the American dream. After immigrating to the United States from Egypt, Samir successfully works his way through a residency and launches his own medical practice as Nagla tends to their firstborn, Hosaam, in the cramped quarters of a small apartment. Soon the growing family moves into a big house in the manicured New Jersey suburb of Summerset, where their three children eventually attend school with Natalie Bradstreet, the daughter of their neighbors and best friends. More than a decade later, the family’s seemingly stable life is suddenly upended when a devastating turn of events leaves Hosaam and Natalie dead and turns the Al-Menshawys into outcasts in their own town.Narrated a year after Hosaam and Natalie’s deaths, Rajia Hassib’s heartfelt novel follows the Al-Menshawys during the five days leading up to the memorial service that the Bradstreets have organized to mark the one-year anniversary of their daughter’s death. While Nagla strives to understand her role in the tragedy and Samir desperately seeks reconciliation with the community, Khaled, their surviving son, finds himself living in the shadow of his troubled brother. Struggling under the guilt and pressure of being the good son, Khaled turns to the city in hopes of finding happiness away from the painful memories home conjures. Yet he is repeatedly pulled back home to his grandmother, Ehsan, who arrives from Egypt armed with incense, prayers, and an unyielding determination to stop the unraveling of her daughter’s family. In Ehsan, Khaled finds either a true hope of salvation or the embodiment of everything he must flee if he is ever to find himself.Writing with unflinchingly honest prose, Rajia Hassib tells the story of one family pushed to the brink by tragedy and mental illness, trying to salvage the life they worked so hard to achieve. The graceful, elegiac voice of In the Language of Miracles paints tender portraits of a family’s struggle to move on in the wake of heartbreak, to stay true to its traditions, and above all else, to find acceptance and reconciliation.

This one is a hard one to rate. At times it moves very slowly and some of the characters are a little annoying. I was really tempted to put the book aside several times, and even after I finished, I would probably have only given the book 2, or maybe 2-½ stars. But amazingly, one week after I finished this book, it has stuck with me. I can’t seem to stop thinking about Khaled and his situation. I’ve always felt that maybe the survivors of a criminal are also victims who suffer loss, and this book really shows that side of a crime.This would be a good book club selection

Let me tell you a bit about what I liked. First, even though there were characters I found unlikeable (Samir and Nagla, the parents), there were a couple of characters I liked very much. I liked Khaled, the main character. His feelings of being victimized by both his brother, who left the family behind to suffer the consequences when he murdered the girl next door, and by the community, who chose to look at him with suspicion as a Muslim, felt very real. I also loved his grandmother, Ehsan, an old Egyptian woman who barely spoke English. While she may not have been well educated or ‘smart’, she was definitely wise. One thing I really appreciated was her continuous praying over the ‘everyday’ in her life, constantly calling upon God to aid and watch over her and her loved ones. I also liked that at the beginning of each chapter, the author started with a quote in English and then a corresponding quote from Islam. It was a subtle way to point out that Muslims really aren’t very different from Christian Americans.

Now for some of the things I didn’t like so much. The book moves very slowly, especially at the beginning, and it is hard to figure out where the story is going. I didn’t like the characters of Samir and Nagla. Samir is arrogant and is so concerned with his image and with fitting in with his community, that he often sacrifices the well-being of his family. Nagla is sometimes a bit of his doormat, failing standing up to Samir and the actions which affect their children negatively. They have a troubled marriage, and even at the end of the book, after a fairly long epilogue, I am not sure how their story ends.

After thinking about this book all week, I’m raising my rating to 3 stars as an individual read and 4 stars as a book club selection, because it is one of those books that improve greatly with analysis and discussion.

I was provided an advanced review copy of this book through the Penguin First To Read program. This did not affect my opinion of the book.

Email ThisBlogThis!Share to TwitterShare to FacebookShare to Pinterest
Labels: In The Language of Miracles, Rajia Hassib, review