Review: Daughter of Sand and Stone - with GIVEAWAY! 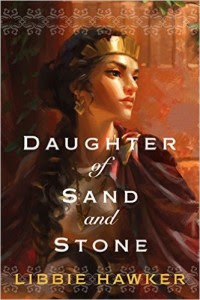 Daughter of Sand and Stone
by Libbie Hawker\

When Zenobia takes control of her own fate, will the gods punish her audacity?

Zenobia, the proud daughter of a Syrian sheikh, refuses to marry against her will. She won’t submit to a lifetime of subservience. When her father dies, she sets out on her own, pursuing the power she believes to be her birthright, dreaming of the Roman Empire’s downfall and her ascendance to the throne.

Defying her family, Zenobia arranges her own marriage to the most influential man in the city of Palmyra. But their union is anything but peaceful—his other wife begrudges the marriage and the birth of Zenobia’s son, and Zenobia finds herself ever more drawn to her guardsman, Zabdas. As war breaks out, she’s faced with terrible choices.

From the decadent halls of Rome to the golden sands of Egypt, Zenobia fights for power, for love, and for her son. But will her hubris draw the wrath of the gods? Will she learn a “woman’s place,” or can she finally stake her claim as Empress of the East?

This was an interesting book and once I got into the story, I enjoyed it very much. The writing was descriptive and truly created a picture in my head. It took me a while to really get into the story, but I was well into it by the end of the first chapter. The difficulty was due to my shortcomings and not due to the story or the writing. I don’t have much background in world history, so for much of the first chapter I almost felt like I was reading fantasy or dystopian fiction. The setting and place names were unfamiliar to me, as was the name of the heroine, Zenobia. So I ended up re-reading the first chapter twice, just to get the names straight!

Once I oriented myself, I really enjoyed learning about the times and grew to like many of the characters. Ironically, I’m not sure I was supposed to like Aurelian, but he was possibly my favorite character in the book. I also liked Zenobia, though at times I found her extremely frustrating. She was a strong woman and a leader, but at times sometimes her choices annoyed me. It often seemed that when there was a decision to be made, she chose the one that brought her glory at the expense of her family.

This was historical fiction and did it’s job, because it enticed me to learn more. I went through several stages, first wondering if Zenobia was a real person, and then after realizing she was a real person, I wanted to immediately  google her to learn more! I appreciated that the author included some of the history and her reasoning in developing the characters the way she did in her notes at the end of the book. If you enjoy historical fiction, pick this one up.

And if you would like to win a copy, I have one copy to give away! Just click the link below and fill out the form. (Sorry, US and Canda only!)

GIVEAWAY
DAUGHTER OF SAND AND STONE

Libbie Hawker writes historical and literary fiction featuring deeply human characters, with rich details of time and place. She is the author of ten novels, most of which take place in the distant past among ancient civilizations. She lives in the beautiful San Juan Islands with her husband.

Email ThisBlogThis!Share to TwitterShare to FacebookShare to Pinterest
Labels: book you, Daughter of Sand and Stone, give away, giveaway, Libbie Hawker, review, TLC Book Tour