Review: The Sisters of Versailles plus GIVEAWAY! (CLOSED) 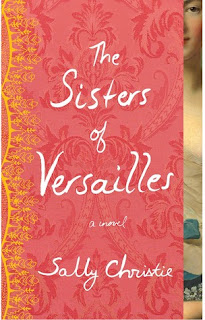 Why I chose this book? a sisters story AND European history!
When I read this book? February 2016
Who should read this book? readers who enjoy stories of European nobility
Source: TLC Book Tours
Here is a synopsis of The Sisters of Versailles from Goodreads

A sumptuous and sensual tale of power, romance, family, and betrayal centered around four sisters and one King. Carefully researched and ornately detailed, The Sisters of Versailles is the first book in an exciting new historical fiction trilogy about King Louis XV, France's most "well-beloved" monarch, and the women who shared his heart and his bed.

Goodness, but sisters are a thing to fear.

Set against the lavish backdrop of the French Court in the early years of the 18th century, The Sisters of Versailles is the extraordinary tale of the five Nesle sisters: Louise, Pauline, Diane, Hortense, and Marie-Anne, four of whom became mistresses to King Louis XV. Their scandalous story is stranger than fiction but true in every shocking, amusing, and heartbreaking detail.

Court intriguers are beginning to sense that young King Louis XV, after seven years of marriage, is tiring of his Polish wife. The race is on to find a mistress for the royal bed as various factions put their best foot - and women - forward. The King's scheming ministers push Louise, the eldest of the aristocratic Nesle sisters, into the arms of the King. Over the following decade, the four sisters:sweet, naive Louise; ambitious Pauline; complacent Diane, and cunning Marie Anne, will conspire, betray, suffer, and triumph in a desperate fight for both love and power.

In the tradition of The Other Boleyn Girl, The Sisters of Versailles is a clever, intelligent, and absorbing novel that historical fiction fans will devour. Based on meticulous research on a group of women never before written about in English, Sally Christie's stunning debut is a complex exploration of power and sisterhood; of the admiration, competition, and even hatred that can coexist within a family when the stakes are high enough.

I picked this one up because it is a sisters story — something that always interests me — and it is historical fiction set in 18th century France. It didn’t hurt that I’ve read good reviews of it by bloggers I trust. They were not wrong. Though I had a little trouble getting my hands on the copy, once I did, I devoured the book. It took me a couple of days, but only because I had to participate in life. I could have easily read this one to completion!

I really didn’t know much about France in this time, and I’ve never be able to keep all the King Louis straight — a sad admission from one who lives in a city name after Saint Louis! After reading this book, I will never again forget King Louis XV! I had to make use of Wikipedia several times as I read this one, because really … the King slept with four sisters!? I was sure this was fiction, but I was wrong. There really were five Nesle sisters, and four of them became mistress to the King! This was quite a conversion for a King who, when he took his first mistress, worried about his relationship with God and his sin.

I really enjoyed getting to know these sisters and the dynamics of their relationships. Like most sisters, they sometimes had trouble remembering they were sisters and loved each other. There were times of jealousy, times of sadness and times of joy. And because they were women of the 18th century, they often had little choice about how their life progressed. This book is the first in a trilogy and gets the series off to a great start. I can’t wait to read the next book, The Rivals of Versailles! Watch for a review of that one, coming soon!

If you’d like to get started on the series, I have a great opportunity for you to do that! I have one copy of the book to give away. Just leave a comment below telling me why you would like to win this book. Be sure to leave an email address or another way to contact you, so that I can notify you if you are the winner! (Sorry, this is open to addesses in the US and Canada only!) The winner will be chosen on Wednesday, March 9, 2016, so leave your comment before then!

Sally Christie was born in England of British parents but grew up mostly in Canada. As a child she moved around with her family and then continued her wandering as she pursued a career in international development; she’s lived in 14 different countries and worked in many more. She’s now settled in Toronto and loving it.

Sally lives and breathes history; ever since she read Antonia Fraser’s masterful Mary, Queen of Scots when she was 10, she’s been an avid history junkie. She wishes more attention and technical innovation was devoted to time travel, because there is nothing she would rather do than travel back in time! Writing historical fiction is a poor substitute, but it’s the best one we have at the moment.

When not reading and writing history, she’s a tennis and Scrabble fanatic.