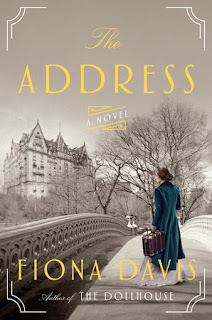 The Address
by Fiona Davis

Fiona Davis, author of The Dollhouse, returns with a compelling novel about the thin lines between love and loss, success and ruin, passion and madness, all hidden behind the walls of The Dakota—New York City’s most famous residence.

After a failed apprenticeship, working her way up to head housekeeper of a posh London hotel is more than Sara Smythe ever thought she’d make of herself. But when a chance encounter with Theodore Camden, one of the architects of the grand New York apartment house The Dakota, leads to a job offer, her world is suddenly awash in possibility—no mean feat for a servant in 1884. The opportunity to move to America, where a person can rise above one’s station. The opportunity to be the female manager of The Dakota, which promises to be the greatest apartment house in the world. And the opportunity to see more of Theo, who understands Sara like no one else...and is living in The Dakota with his wife and three young children.

In 1985, Bailey Camden is desperate for new opportunities. Fresh out of rehab, the former party girl and interior designer is homeless, jobless, and penniless. Two generations ago, Bailey’s grandfather was the ward of famed architect Theodore Camden. But the absence of a genetic connection means Bailey won’t see a dime of the Camden family’s substantial estate. Instead, her “cousin” Melinda—Camden’s biological great-granddaughter—will inherit almost everything. So when Melinda offers to let Bailey oversee the renovation of her lavish Dakota apartment, Bailey jumps at the chance, despite her dislike of Melinda’s vision. The renovation will take away all the character and history of the apartment Theodore Camden himself lived in...and died in, after suffering multiple stab wounds by a madwoman named Sara Smythe, a former Dakota employee who had previously spent seven months in an insane asylum on Blackwell’s Island.

One hundred years apart, Sara and Bailey are both tempted by and struggle against the golden excess of their respective ages—for Sara, the opulence of a world ruled by the Astors and Vanderbilts; for Bailey, the free-flowing drinks and cocaine in the nightclubs of New York City—and take refuge and solace in the Upper West Side’s gilded fortress. But a building with a history as rich—and often tragic—as The Dakota’s can’t hold its secrets forever, and what Bailey discovers in its basement could turn everything she thought she knew about Theodore Camden—and the woman who killed him—on its head.

With rich historical detail, nuanced characters, and gorgeous prose, Fiona Davis once again delivers a compulsively readable novel that peels back the layers of not only a famed institution, but the lives—and lies—of the beating hearts within.

I was attracted to this one because I’ve heard good things about the author’s previous work and both the cover and the synopsis pulled me in. When I had the chance to get an advance copy through the Penguin First To Read program, I grabbed it!

The story is set in The Dakota, the building famous for being the residence of John Lennon at the time of his murder outside the building. The main characters are young women living in the building 100 years apart, and the story alternates between these time periods. Sara Smythe is a young English woman who immigrates to the US to become ‘managerette’ of the building when it opens and hoping for a better life than she could have in England. Her life gets messy as she gets closer to Theodore Camden, the architect who resides in the building as he oversees the opening.

Bailey Camden is a young woman who is indirectly related to the Camden family. Her grandfather was a ward of Theodore Camden, but he wanted nothing to do with the family that left him out of the family legacy. Bailey’s best friend is her cousin Melinda Camden, who, along with her twin brother, is an heir to the Camden legacy. In subtle ways, she always manages to remind Bailey of the family legacy that Bailey is not part of. Bailey has just come out of rehab for an addiction problem, but Melinda ignores that problem and encourages Bailey to party with her and her boyfriend. The girls grew up together playing in the apartment that Melinda now occupies, learning the story of how Melinda’s great-grandfather, Theodore Camden, was murdered by the Sara Smythe, the insane managerette. The mystery is that no one know what drove Sara to murder.

The story drew me right in and I couldn’t wait to find out what happened — until about the middle of the book. Then it slowed down for me tremendously, to the point that I almost put the book aside. Both Sara and Bailey were making some very bad choices, even while telling themselves they were making bad choices, and that was difficult for me to read about! Luckily that only lasted for a short time, and the story picked right up again! The story of Sara and Theodore was much more compelling for me than that of Bailey. I understand that the Bailey story was necessary to give us some of the details, but I really wanted to rush through her parts of the story and get back to the Sara story!

I think this will be a great book for book clubs! There are so many things I would like to discuss right now, but I can’t because it would give spoilers! I can say that many of them have to do with motivation of the characters for the actions they took, and the consequences of their decisions.

I received an advanced review copy of this book through the Penguin First To Read program.

Email ThisBlogThis!Share to TwitterShare to FacebookShare to Pinterest
Labels: First To Read, review