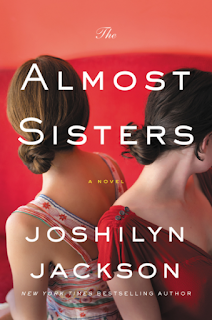 The Almost Sisters
by Joshilyn Jackson

Why I chose this book? I enjoyed Someone Else's Love Story by the same author
When I read this book? July 2017
Who should read this book? Fans of southern fiction, mystery, Joshilyn Jackson and more!
Source: TLC Book Tours
My Rating:   ✰✰✰✰½     4½ Stars

• Hardcover: 352 pages
• Publisher: William Morrow (July 11, 2017)
With empathy, grace, humor, and piercing insight, the author of gods in Alabama pens a powerful, emotionally resonant novel of the South that confronts the truth about privilege, family, and the distinctions between perception and reality—the stories we tell ourselves about our origins and who we really are.
Superheroes have always been Leia Birch Briggs’ weakness. One tequila-soaked night at a comics convention, the usually level-headed graphic novelist is swept off her barstool by a handsome and anonymous Batman.
It turns out the caped crusader has left her with more than just a nice, fuzzy memory. She’s having a baby boy—an unexpected but not unhappy development in the thirty-eight year-old’s life. But before Leia can break the news of her impending single-motherhood (including the fact that her baby is biracial) to her conventional, Southern family, her step-sister Rachel’s marriage implodes. Worse, she learns her beloved ninety-year-old grandmother, Birchie, is losing her mind, and she’s been hiding her dementia with the help of Wattie, her best friend since girlhood.
Leia returns to Alabama to put her grandmother’s affairs in order, clean out the big Victorian that has been in the Birch family for generations, and tell her family that she’s pregnant. Yet just when Leia thinks she’s got it all under control, she learns that illness is not the only thing Birchie’s been hiding. Tucked in the attic is a dangerous secret with roots that reach all the way back to the Civil War. Its exposure threatens the family’s freedom and future, and it will change everything about how Leia sees herself and her sister, her son and his missing father, and the world she thinks she knows.

Wow! This book was not what I expected! And I mean that in the best possible way! I’d read and enjoyed previous books by Joshilyn Jackson, so as soon as I saw she had a new one, I was interested. And I expected to be entertained, so that wasn’t a surprise. What DID surprise me was how much depth the story had! I mean, if you only want to read it as a quick summer read, you can do that and enjoy it, and it won’t take you more than a couple of sittings to finish it!

But there is so much more going on in this book if you want to dig deeper. There is the story of 2 little old ladies who are best friends and protective of one another. There is the mystery of the bones in the long hidden trunk in the attic. There is the broken marriage and the teenage girl dealing with paternal abandonement. There is an unexpected pregnancy after a one-night stand complete with biracial child. And the story even has Batman! Book clubs are going to love this one!

I really connected with the characters and cared what happened to them, especially Wattie and Birchie, the two little old ladies, and Leia and Batman. I also love the cover! It kept me guessing awhile though about the sisters on the cover. Are they the little old ladies in the youth, or Leia and her step-sister Rachel?

This will be a fun summer selection for books clubs with a plot that you can move through quickly to finish in a sitting or two, but enough depth to lead to interesting discussions!

Joshilyn Jackson is the New York Times bestselling author of seven novels, including gods in Alabama and A Grown-Up Kind of Pretty. Her books have been translated into a dozen languages. A former actor, Jackson is also an award-winning audiobook narrator. She lives in Decatur, Georgia, with her husband and their two children.