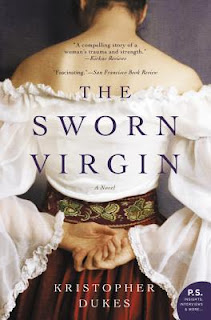 The Sworn Virgin
by Kristopher Dukes

Why did you choose this book? The concept of a sworn virgin being given the rights of a man
When did you read this book? August 2017
Who should read this book? Readers of historical fiction
Source: Library Thing Early Reviewers
My Rating:  ☆☆☆½    3½ Stars

Here is a synopsis of The Sworn Virgin from Goodreads

Dukes's gripping historical novel tells the tale of a desperate Albanian woman who will do whatever it takes to keep her independence and seize control of her future...even if it means swearing to remain a virgin for her entire life.

When eighteen-year-old Eleanora’s father is shot dead on the cobblestone streets of 1910 Albania, Eleanora must abandon her dream of studying art in Italy as she struggles to survive in a remote mountain village with her stepmother Meria.

Nearing starvation, Meria secretly sells Eleanora into marriage with the cruel heir of a powerful clan. Intent on keeping her freedom, Eleanora takes an oath to remain a virgin for the rest of her life—a tradition that gives her the right to live as a man: she is now head of her household and can work for a living as well as carry a gun. Eleanora can also participate in the vengeful blood feuds that consume the mountain tribes, but she may not be killed—unless she forsakes her vow, which she has no intention of ever doing.

But when an injured stranger stumbles into her life, Eleanora nurses him back to health, saving his life—yet risking her own as she falls in love with him...
My Review

This one is a hard one for me to rate, because I liked it a lot….right up until it ended! The ending alone is enough for me to recommend it to book clubs….just so I have someone to discuss it with!

Other than the ending, I really enjoyed the story. It was interesting to read about the tradition of the ‘sworn virgin’ being given the rights of a man. This reminded me a lot of the bacha posh of Afghanistan, which I read about in The Underground Girls of Kabul and The Pearl That Broke Its Shell. The descriptions of the mountain country and the markets in Albania pulled me right into the story. To be honest, had I not been told at the beginning that the story was set in 1910, I would have easily have believed that this took place a few hundred years ago!

Eleanora is a complicated young woman — spoiled and self-centered — who gets herself into a lot of trouble by thinking about she wants and going after it impulsively, without ever considering the consequences of her actions or how they may affect others. Without giving any spoilers, I can tell you that almost everything Eleanora does is done impulsively and without a lot of thought; she is thrust into circumstances and just reacts. She never seems fully invested in her status as a sworn virgin, which is probably good, because it doesn’t last very long. You can probably tell that I didn’t like the character of Eleanora very much.

Other than the ending, my major quibble with the book is the synopsis. The synopsis led me to believe that Eleanora’s father was killed and she became a sworn virgin almost immediately at the beginning of the book, and that she spent some time in this role before she stumbled upon the injured stranger. The truth is that I was almost halfway through the book before Eleanora made her vow and then very little time passed before she broke it. I was a little disappointed not to have learned more about the life of a woman as a sworn virgin. And as I mentioned, I was very disappointed in Eleanora at the end of the book. However, I did enjoy the book and think it will make a good selection for book clubs!

You can visit the publisher’s website to read an excerpt or listen to a sample.
You can see an interview with the author here.
You can read an article about sworn virgins living in current day Albania here.

I won a copy of this book through the Library Thing Early Reviewers program.