Review: The Widow of Wall Street 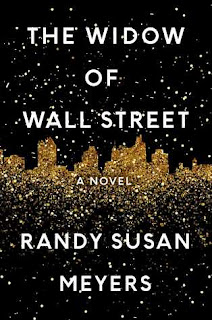 The Widow of Wall Street
by Randy Susan Meyers

Why did you choose this book? I’ve enjoyed other work by this author
When did you read this book? November 2017
Who should read this book? Readers of ‘ripped from the headlines’ fiction
Source: library ebook
My Rating: ✰✰✰✰  4 Stars

What’s real in a marriage built on sand and how do you abandon a man you’ve loved since the age of fifteen?

Phoebe sees the fire in Jake Pierce’s belly from the moment they meet as teenagers in Brooklyn. Eventually he creates a financial dynasty and she trusts him without hesitation—unaware his hunger for success hides a dark talent for deception.

When Phoebe learns—along with the rest of the world—that her husband’s triumphs are the result of an elaborate Ponzi scheme her world unravels. Lies underpin her life and marriage. As Jake’s crime is uncovered, the world obsesses about Phoebe. Did she know her life was fabricated by fraud? Did she partner with her husband in hustling billions from pensioners, charities, and CEOs? Was she his accomplice in stealing from their family and neighbors?

Debate rages as to whether love and loyalty blinded her to his crimes or if she chose to live in denial. While Jake is trapped in the web of his own deceit, Phoebe is faced with an unbearable choice. Her children refuse to see her if she remains at their father’s side, but abandoning Jake, a man she’s known since childhood, feels cruel and impossible.

From Brooklyn to Greenwich to Manhattan, from penthouse to prison, with tragic consequences rippling well beyond Wall Street, The Widow of Wall Street exposes a woman struggling to redefine her life and marriage as everything she thought she knew crumbles around her.

I’ve read and enjoyed other books by Randy Susan Meyers [Accidents of Marriage] [The Murderer’s Daughters], so when I saw she had a new book out, I immediately put it on my to-read list. The cover and synopsis motivated me to move it to near the top!

This is a ‘ripped-from-the-headlines’ story inspired by the Bernie Madoff financial scandal of 2008. On the author’s website, she states that one of her motivations in writing the story was to explore how members of the family are affected when a person commits a crime. “Every crime has multiple victims—including the family of the perpetrator.” SInce I often wonder about the mother of the criminal and how she must feel when I hear about a crime, this interested me.

The story is told from the point of view of Phoebe, wife of Jake Pierce. We know from the beginning that Jake is in prison and Phoebe is in a prison of sorts herself. The book is the story of the 50-60 years leading to the present situation

Phoebe and Jake met in high school, and Phoebe is a typical woman of the 50s. She went to college and prepared for a career, but once she married, she was expected to abandon that career and devote herself to her children and husband and her husband’s business interests. Yes, she could participate in charitable causes, but her appearance and actions must always reflect well on her husband and his business.

Phoebe has an elite lifestyle, much different to the life she had with her parents. Her husband makes lots of money and she is happy to spend it. There have been suspicious signs with her husband and his business through the years, but Jake has always been able to explain them away and remind her it was his job to make the money and hers to maintain their home. Phoebe accepts this willingly until the day her world comes crashing down around her, causing a reversal in her lifestyle and an estrangement from her children.

I really enjoyed this book. I felt bad for Phoebe, even though she could have avoided some of this by asking more questions and trusting less. I also felt a bit sorry for Jake at times. He seemed like a good-hearted person who wanted to make things right, but his ego got in his way, and he got in too deep.

One other thing I really like about this book is the cover. I’m not sure what the significance is. It appears to be a skyline of Manhattan with the sparkle flaking away. I’m thinking ‘all that glitters is not gold’?

This will be a good selection for book clubs with discussions of trust and loyalty, repercussions of crime, and current events. You can visit the author’s website for discussion questions or to read an excerpt of the book and learn about the author’s inspiration for this story.