Review: I'll Be Your Blue Sky 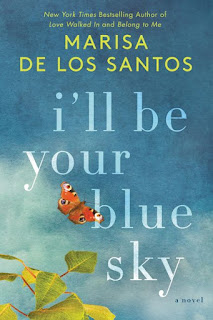 Here is a synopsis of I’ll Be Your Blue Sky from TLC Book Tours
• Hardcover: 320 pages
• Publisher: William Morrow (March 6, 2018)
The New York Times bestselling author revisits the characters from her beloved novels Love Walked In and Belong to Me in this captivating, beautifully written drama involving family, friendship, secrets, sacrifice, courage, and true love for fans of Jojo Moyes, Elin Hilderbrand, and Nancy Thayer.
On the weekend of her wedding, Clare Hobbes meets an elderly woman named Edith Herron. During the course of a single conversation, Edith gives Clare the courage to do what she should have done months earlier: break off her engagement to her charming—yet overly possessive—fiancé.
Three weeks later, Clare learns that Edith has died—and has given her another gift. Nestled in crepe myrtle and hydrangea and perched at the marshy edge of a bay in a small seaside town in Delaware, Blue Sky House now belongs to Clare. Though the former guest house has been empty for years, Clare feels a deep connection to Edith inside its walls, which are decorated with old photographs taken by Edith and her beloved husband, Joseph.
Exploring the house, Clare finds two mysterious ledgers hidden beneath the kitchen sink. Edith, it seems, was no ordinary woman—and Blue Sky House no ordinary place. With the help of her mother, Viviana, her surrogate mother, Cornelia Brown, and her former boyfriend and best friend, Dev Tremain, Clare begins to piece together the story of Blue Sky House—a decades-old mystery more complex and tangled than she could have imagined. As she peels back the layers of Edith’s life, Clare discovers a story of dark secrets, passionate love, heartbreaking sacrifice, and incredible courage. She also makes startling discoveries about herself: where she’s come from, where she’s going, and what—and who—she loves.
Shifting between the 1950s and the present and told in the alternating voices of Edith and Clare, I’ll Be Your Blue Sky is vintage Marisa de los Santos—an emotionally evocative novel that probes the deepest recesses of the human heart and illuminates the tender connections that bind our lives.

I chose to read this one because I’d read other books by this author. (Falling Together - The Precious One). Oh, and the cover. Isn’t that cover beautiful?! This book was a success! I enjoyed it very much.

The story told in alternating time periods. As the book opens in the 1950s, we meet Edith Herron on her wedding day as her husband Joseph introduces her to their new home. (Pay attention, this is where you will learn the significance of the title). Fast forward to contemporary times when we meet Clare Hobbs as she is about to be married—and having second thoughts about going through with it. Shortly before the wedding she excuses herself to take a walk and meets the elderly Edith. After a very brief conversation Clare calls off her wedding and Edith leaves her house to Clare. Clare goes to see the house and begins exploring, uncovering clues to Edith’s past as she goes. This is how we learn the story of Edith and who she is.

I really enjoyed the Edith story and admired Edith, a strong, loyal woman who cared about others. I didn’t dislike Clare, but her story was not nearly as interesting to me. In many ways, the story ended as I thought it would, but there was also some twists that I didn’t see coming. These really added to my enjoyment of the story. If there was one thing I didn’t enjoy, it was that things were resolved just a little too easily between Clare and her ex-fiance, but it didn’t interfere with my enjoyment of the book.

One thing I should point out is that this is the third book in the author’s Love Walked In series. I did not realize this when I picked the book up, but I can say that the book works fine as a stand-alone. I never felt that something was missing or that there was some background detail I needed.

I’ll Be Your Blue Sky was a quick read that I finished in two days, but it could easily have been a ‘one-sitting’ book. This would be a fun selection for a book club that is looking quick, relatively light read that still has plenty of discussion points. Visit the publisher’s website for a reading guide or to read an excerpt.

A New York Times bestselling author and award-winning poet with a PhD in literature and creative writing, Marisa de los Santos lives in Wilmington, Delaware, with her family.