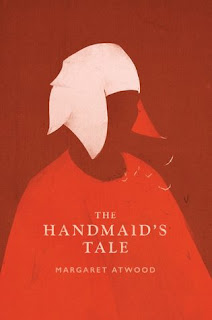 The Handmaid’s Tale
by Margaret Atwood

Here is a synopsis of The Handmaid’s Tale from Goodreads

The Handmaid’s Tale is a novel of such power that the reader will be unable to forget its images and its forecast. Set in the near future, it describes life in what was once the United States and is now called the Republic of Gilead, a monotheocracy that has reacted to social unrest and a sharply declining birthrate by reverting to, and going beyond, the repressive intolerance of the original Puritans. The regime takes the Book of Genesis absolutely at its word, with bizarre consequences for the women and men in its population.

The story is told through the eyes of Offred, one of the unfortunate Handmaids under the new social order. In condensed but eloquent prose, by turns cool-eyed, tender, despairing, passionate, and wry, she reveals to us the dark corners behind the establishment’s calm facade, as certain tendencies now in existence are carried to their logical conclusions. The Handmaid’s Tale is funny, unexpected, horrifying, and altogether convincing. It is at once scathing satire, dire warning, and a tour de force. It is Margaret Atwood at her best.

I’d heard many good things about this book and the author comes recommended from a member of my book club. I downloaded The Handmaid’s Tale onto my Kindle almost a year ago, and have been wanting to get to it for awhile. Finally I got the incentive I needed to read it in the form of a “What’s Next?” challenge hosted by my local library. This month the challenge is to read a book that is set in the future. After all the anticipation, this book was a disappointment to me.

In short, I felt like the story was a big build-up towards…….nothing. While some of the characters were mildly interesting, I never felt like I got to know any of them or their stories. Of course, that may have been the author’s intent — to show us a depersonalized society. But I also felt like I didn’t get to know the story. The way it was written was confusing; we’d get glimpses of the past occasionally, but many of the characters were alluded to long before they were introduced, and I never really felt like I knew what was happening. I didn’t have a clear idea of how the society devolved into what was shown; how the Gilead society was able to infiltrate and depose the US government. I also didn’t like that there was no clear resolution to the story and that I was left hanging. It was obvious that Gilead also collapsed, but I don’t know how or why. I don’t know what became of Offred, the Commander, or any of the other characters.

One thing I did find interesting was reading about 1980’s fashion and society as in the past, realizing it was not the past when this book was written. Mentions of the obsolescence of tape in favor of CD particularly stood out to me.

While I was disappointed in the book as an individual reader, I think that it would make an excellent selection for book clubs. A good discussion always makes a book worthwhile. There is plenty to discuss including what was the author’s intent with the depersonalization of the characters. Other discussions might center around the theocracy and how quickly a society can devolve, whether it is Gilead, Hitler’s Germany, or Trump’s America. A reader’s guide can be downloaded here.