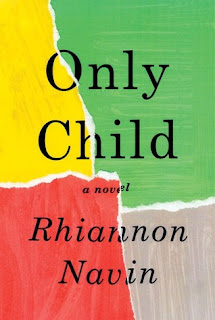 Only Child
by Rhiannon Navin

Why did you choose this book? I read the preview and wanted to read more
When did you read this book? March 2018
Who should read this book? Readers of ‘ripped from the headlines’ fiction
Source: library ebook
My Rating: ✰✰✰✰✰  5 Stars

Here is a synopsis of Only Child from Goodreads

For readers of Room and The Girls, a dazzling, tenderhearted debut about healing, family, and the exquisite wisdom of children, narrated by a seven-year-old boy who reminds us that sometimes the littlest bodies hold the biggest hearts and the quietest voices speak the loudest.

Squeezed into a coat closet with his classmates and teacher, first grader Zach Taylor can hear gunshots ringing through the halls of his school. A gunman has entered the building, taking nineteen lives and irrevocably changing the very fabric of this close-knit community. While Zach's mother pursues a quest for justice against the shooter's parents, holding them responsible for their son's actions, Zach retreats into his super-secret hideout and loses himself in a world of books and art. Armed with his newfound understanding, and with the optimism and stubbornness only a child could have, Zach sets out on a captivating journey towards healing and forgiveness, determined to help the adults in his life rediscover the universal truths of love and compassion needed to pull them through their darkest hours.

I read a preview of this one on the First Look Book Club and and could not put it down. The terror felt by the teacher and her students hiding in the closet while listening to the gunshots felt so real to mel, as did the terror of the mother when she did not find her other son waiting in the church with the other survivors. I read the preview morning of February 14. Just hours later that day, I learned of yet another school shooting, this time at Marjory Stoneman Douglas High School in Parkland, Florida. I was not ready at that point to continue reading the book, but I did put it on reserve. It came in from my library a few weeks later and I finished the book in two days. The terror and emotions still felt real, as did the thoughts of Zach, the 1st grader who survived the shooting, but lost his brother.

Obviously, this was not a fun read, but it was a good read. We followed a family in recovery, hurting so bad that they were not able to give other members of the family the support that was needed. We saw the different ways that different family members attempted to deal with their grief. I especially liked how the book was written from the point of view of 7-year-old Zach, who witnessed a lot of things in his family that he just could not understand, but tried to. For the most part, his voice sounded authentic, though there were a few times when he sounded much older than his 7 years. He occasionally used a word that would make me stop and think “How does a first grader know that word?” Admittedly, I’ve done the same with my own kids, so maybe we just aren’t giving kids credit for what they know. But in his innocence, his observations were spot on, for example, when he wondered at his brother’s funeral why his daddy said Andy always made him happy and he was always proud of him, when Zach knew that wasn’t true.

At first I was sympathetic towards Zach’s mother, Melissa. She had just lost a child and was grief-stricken. But after a short while, my sympathies were with Zach’s father, who finally seemed to get that Zach was hurting and needed his father to put his own grief on hold. Melissa, on the other hand, went on the attack, trying to get revenge on the shooter’s parents, and making  Zach an afterthought while she contined her crusade. Everything was probably wrapped up a little too quickly, but it did make a good story.

This will be a great book club selection for clubs that are looking for something topical, and can discuss the questions with respect when there are conflicting opinions. Some of the topics are obvious; how to prevent school shootings, who is responsible when a shooting occurs, the process of grieving, etc. There is also a reader’s guide at the back of the book.

If you do decide to read this one, and are interested in pairing it with a nonfiction book about gun violence, take a look at Another Day In The Death Of America by Gary Younge.