Sea Creatures
by Susanna Daniel
Why did you choose this book? I have heard so much about this one and it really sounded interesting
When did you read this book? July 2013
Who should read this book? readers of contemporary fiction with a historical link
Source: TLC Book Tours
Here is a synopsis of Sea Creatures from Goodreads.

A mother must make the unthinkable choice between her husband and her son in this riveting domestic drama, the follow up to the author's "exquisite debut" (Publishers Weekly), Stiltsville

When Georgia returns to her hometown of Miami, her toddler son and husband in tow, she is hoping for a fresh start. They have left Illinois trailing scandal and disappointment in their wake: Graham's sleep disorder has cost him his tenure at Northwestern; Georgia's college advising business has gone belly up; and three-year old Frankie is no longer speaking. Miami feels emptier without Georgia's mother, who died five years earlier, but her father and stepmother offer a warm welcome-as well as a slip for the dilapidated houseboat Georgia and Graham have chosen to call home. And a position studying extreme weather patterns at a prestigious marine research facility offers Graham a professional second chance.

When Georgia takes a job as an errand runner for an artist who lives alone in the middle of Biscayne Bay, she's surprised to find her life changes dramatically. Time spent with the intense hermit at his isolated home might help Frankie gain the courage to speak, it seems. And it might help Georgia reconcile the woman she was with the woman she has become.

But when Graham leaves to work on a ship in Hurricane Alley and the truth behind Frankie's mutism is uncovered, the family's challenges return, more complicated than before. Late that summer, as a hurricane bears down on South Florida, Georgia must face the fact that her choices have put her only child in grave danger.

Sea Creatures is a mesmerizing exploration of the high stakes of marriage and parenthood, the story of a woman coming into her own as a mother, forced to choose between her marriage, her child, and the possibility of new love.

I chose to read this book this book because the synopsis captured my attention. I mean, how could Graham’s sleep disorder have possibly caused him to lose his job? And how is Frankie’s inability to speak connected to this? I’m sorry to say that, though I got the answers, I didn’t find this to be a compelling read. For about the first half of the book, the story was on the verge of starting but never quite got there. It made me want to scream ‘get on with it already!’. If you had asked me at that point how I rated the book, I’d have been hard pressed to give it 2 stars!

Luckily for me, the book did get pretty interesting after that, though for the most part is was predictable. From almost the beginning, I predicted how Graham and Georgia’s marital woes would be resolved. I also pretty quickly was able to predict what would happen to Frankie. And even more so the night the hurricane came. Much like Frankie’s pediatrician, I wanted to shake Georgia and yell ‘how could you NOT have seen that coming!?’  But even though the story was predictable, once the story got going, it was a pretty good story.

My biggest issue with the story was the characters. I never connected with them enough to care what happened to them. I did like Charlie, the hermit, though I didn’t like all his actions. I also liked Georgia’s stepmother, Lydia, but she wasn’t a major character. And of course, I liked little Frankie, the 3 year old son of Georgia.

The story with Charlie didn’t end as I’d hoped, but it probably ended appropriately. And one thing I really appreciated was that author did WRITE an ending. Too often, I am left disappointed when an author just stops writing, and we have no clue what happens to the characers down the road. In the last chapter of Sea Creatures, Susannna Daniel gives us a glimpse several years into the future so we know ‘what happens next’.

Though I didn’t enjoy this story as much as I’d expected, it was a pretty good story (once it started). Other reviewers have enjoyed the book much more than I did, so I urge you to take a look at other reviews on the tour before you decide you are not going to read this! 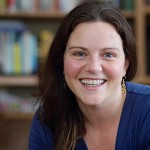