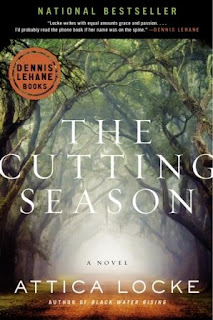 The Cutting Season
by Attica Locke

Caren Gray manages Louisiana’s stately Belle Vie, an antebellum plantation-turned-tourist attraction where the past and the present coexist uneasily. Outside the gates, an ambitious corporation snaps up sugarcane fields from struggling families, replacing local employees with illegal laborers. Tensions mount when a female migrant worker is found in a shallow grave on the edge of the plantation property, her throat cut clean through.

As the sheriff’s department zeroes in on a suspect, Caren suspects the police are chasing the wrong leads. Putting herself at risk, she unearths startling secrets about the long-ago disappearance of a former slave that has unsettling ties to the current murder—secrets that a desperate killer will stop at nothing to keep buried.

Taut, hauntingly resonant, and beautifully written, The Cutting Season is a thoughtful meditation on how America reckons its past with its future.

This a good mystery with the action starting almost from the first page of the book! Caren Gray is the single mother of a bright young daughter. Her ex is a DC lawyer whom she met in law school many years ago. Caren dropped out of law school and currently manages the historic Belle Vie, a former plantation that is now a historical site and tourist attraction. Caren is the perfect choice for management because not only is she bright, she has a personal tie to the plantation. She was raised on site where her mother was the head cook, and her great-great-grandfather was a former slave who lived in one of the cabins.

One day, the body of a murdered migrant worker is unearthed on the plantation. Everyone on the plantation is suspect and the when police narrow in on one of Caren’s employees, Caren puts in a call to her ex to request his legal advice. He comes to town to check on his daughter.

From here, the story gets really interesting, with lots of twists and turns. Every time you think you MIGHT know who the murderer is, there is another twist. If you are paying attention, there is one pretty big clue in there that might lead you to the right conclusion. And even then, you won’t be sure until you finish the book (unless you skip to the end like my good friend does!) There is plenty of suspense in this book and you won’t want to put it down until you get this figured out!

I really enjoyed the book. My only very slight issue is the end. While I understand Caren’s decision, I wish things would have ended a little differently as far as the plantation goes. I kind of felt like justice wasn’t done. And I really wish there would have been some sort of epilogue to let us know what these characters were up to five years down the road. These are really minor points though, and do not take away from the fact that this is a good book!

Attica Locke is the author of the widely acclaimed debut novel Black Water Rising, which was
nominated for a Los Angeles Times Book Prize, an Edgar Award, and an NAACP Image Award, and was short-listed for the UK’s Orange Prize. She lives in Los Angeles with her husband and daughter.