Why did you choose this book? the title and the setting


Who should read this book? someone looking for a bit of romance, a bit of mystery, and a bit of adventure


Here is a synopsis of The Prodigal from TLC Book Tours

For 2,000 years, Christendom has believed that faith and penitence are the narrow gates through which all who seek heaven must pass, and that the church on Earth holds the key. What if a forgotten relic and an abandoned ship thought to have been lost at sea more than a century ago suddenly reappeared to cast doubt on that belief? Who would seek to use it? Who would seek to destroy it? And whose lives would it forever change?

Four troubled residents of Ocracoke Island find their destiny and the answers to these questions in The Prodigal, the debut novel by Michael Hurley that Kirkus calls “stirring, romantic and evocative of the sea’s magic.” Marcus O’Reilly, a renegade and alcoholic Catholic priest, must confront his inner demons.  Ibrahim Joseph, a Bahamian fugitive, must face his past. Aidan Sharpe, a fallen lawyer, struggles with self-doubt and his growing affection for Molly McGregor, a fearless towboat captain who cannot find the courage to love. They will all be drawn into a mystery as old as Calvary that unfolds with the reappearance of the ship.

I first picked this book up because of the title. Something about the work ‘prodigal’ always draws me in! But then I saw the setting, Ocracoke Island, and knew I would be reading this one. The Outer Banks is one of my favorite places and I’ve been to Ocracoke more than once! The beginning of the book seemed to ebb and flow, just like the ocean. It was slow paced, which was good, because there were several characters introduced, and I sensed eventually they would all be connected, so I wanted to take my time getting to know them. I loved the characters. All were flawed, some more than others, but most were loveable characters that I wanted to know.

The story revolves around Aiden, a recently disgraced lawyer who has been struggling with himself for some time. After losing his law license, he comes to Ocracoke to regroup under the care of a priest, Father Marcus. Marcus is himself flawed, an alcoholic, banished to the island because of his conflict with the Bishop. There are so many characters, I can’t tell you about all of them, but one of my favorite is Sarah, a woman who washed ashore with no memory of who she is, but who marches to her own drummer.

Once we get to know the characters, the action begins. Sarah disappears, and while searching for her, Marcus and his friends discover Prodigal, a worn old boat in need of refurbishment.  The group decides to race Prodigal in a big money sailing race. There are ‘bad guys’ racing the big new boat. I don’t know much about racing, and some of the terms were new to me, but I think the author did a good job of using the language of sailing while explaining what I needed to know to understand this story. I think if I were actually involved in racing, I would enjoy this story even more! The story was exciting and the ending good.

There was some sadness in the story but I enjoyed it anyway. The story would be great for a discussion group! It is thought provoking on several levels! I’m still thinking about it and what it all means. There were some things at the end that I still didn’t quite understand, but that is okay. I think I’m going to take the advice of one of the characters in the book…“telling me not to try -- to just accept it on faith, along with everything else we don’t know or can’t understand” 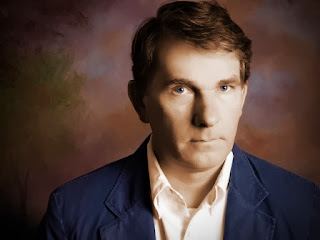 Michael Hurley lives in Raleigh, North Carolina with his wife Susan. Together they have four children ranging in age from 19 to 23.  Born in Baltimore in 1958, Michael studied English at the University of Maryland and law at St. Louis University. He was licensed to practice law in Texas in 1984 and North Carolina in 1993.  He is the senior attorney in a small defense firm in Raleigh and has been recognized in North Carolina Super Lawyers each year since that recognition was begun in 2006.*
A lifelong sailor, Michael obtained his captain’s license from the U.S. Coast Guard in 1992 and, while waiting to receive his North Carolina law license, took six months off from the practice of law to work as a sailboat charter captain in New Bern. Between 1995 and 2003, while practicing law full-time, he also wrote and published Paddle & Portage, a quarterly literary journal on wilderness canoeing enjoyed by more than 10,000 subscribers in 48 states.  When he is not sailing or writing or canoeing, Michael continues a hopeless quest to prove that his piano teachers at Baltimore’s Peabody Institute were wrong about him all along.