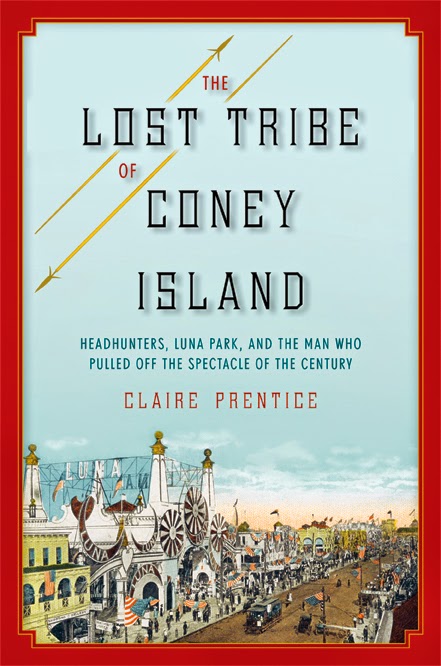 The Lost Tribe of Coney Island
by Claire Prentice

Readers of Erik Larson will love this tale of sex, greed, and the American dream: A huckster imports a tribe of Filipinos to Coney Island’s Luna Park, and two cultures collide.

The Lost Tribe of Coney Island unearths the forgotten story of the Igorrotes, a group of “headhunting, dog-eating savages” from the Philippines, who were transported to New York in 1905 to appear as “human exhibits” alongside the freaks and curiosities at Coney Island’s Luna Park. Millions of fair-goers delighted in their tribal dances and rituals, near-nudity, tattoos, and stories of headhunting.

Journalist Claire Prentice, who has spent years researching the topic, brings the story to life with her fluid prose and vivid descriptions. The book boasts a colorful cast of characters, including the disgraced lieutenant turned huckster Truman K. Hunt; his Filipino interpreter, Julio Balinag; the theme park impresarios behind Luna Park, Fred Thompson and Elmer “Skip” Dundy; and Dogmena, a beautiful girl who became a favorite with New York’s social elite. The Lost Tribe of Coney Island  is a fascinating social history and a tale of adventure, culture-clash, and the American dream.

I chose to read this book because the St. Louis connection caught my eye immediately when this book came up as part of the book tour. I didn’t know the name of the Phlippine tribe (Igorrotes), but I did know that they appeared at the 1904 World Fair in St. Louis, and that a neighborhood on the former Fair site is known as ‘Dogtown’. Legend is that the tribe that took up residence there during the Fair ate dogs. Stories have been told about the tribe stealing pets and eating them; something I now suspect was exaggerated after reading  this book!

Throughout much of the book, I took breaks to wonder. This all took place only a little over 100 years ago, and I kept realizing how much things have changed! The very idea of putting humans ‘on display’ as if they were in a zoo is so off-putting to us today, and yet, in some ways I can understand why it happened. People did not have the ability to travel to distant parts of the world, and one could not simply google ‘Igarrote’ to learn about their culture, so this was a way to let the common many learn about them. Coupled with the fact that they were, at least at the beginning, willing participants, you can ALMOST excuse this as actors in a perfomance. ALMOST! But that was BEFORE I learned that they were cheated out of their salary and basically held prisoner by Dr. Hunt!

The other thing that forced me to keep reminding myself that this was a century ago was the actual chase for Dr. Hunt. It seemed almost unbelievable that he wasn’t tracked down almost immediately. He took ‘his’ tribe and scurried from town to town, always avoiding the authorities. Of course now, someone would take a selfie with one of the Igorrotes and post to Facebook and the authorities would know immediately where to go to arrest Dr. Hunt. But news traveled much more slowly at the turn of the last century.

I have to admit that until I read this book, I didn’t know much about Coney Island or the ‘amusement park’ industry of the early 1900s. I am lucky enough to live in a library district that offers e-borrowing of videos and found one about Coney Island. It really didn’t tell much at all about the Igorrote tribe; I think it was literally one sentence. But I’m glad I watched it first because it gave me a little background into the competition between the amusement park owners of the day, and let me see some of the building and attractions, and gave me some insight into why exhibits of humans might be seen as acceptable in those days! If you live in a district that offers Hoopla service, be sure to check this video out!

This story was engrossing and kept my attention! There were so many characters, and at the beginning I kept confusing them, but it didn’t take long at all to get to know their personalities and keep them straight. The book is well-researched, with plenty of historical detail, and an entertaining read! If you enjoy history and learning about the attitudes of the early twentieth century, be sure to pick this one up!

Claire Prentice is an award-winning journalist whose work has been published in The Washington Post, The Times of London, The Guardian, Sydney Morning Herald, BBC Online, Cosmopolitan, and Marie Claire.

Connect with Claire on her blog, claireprentice.wordpress.com.