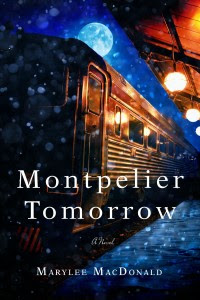 Why did you choose this book? a story of family drama
When did you read this book? August 2015
Who should read this book? readers of contemporary issues
Source: TLC Book Tours
Here is a synopsis of Montpelier Tomorrow from Goodreads
Mid-life mom, Colleen Gallagher, would do anything to protect her children from harm. When her daughter’s husband falls ill with ALS, Colleen rolls up her sleeves and moves in, juggling the multiple roles of grandma, cook, and caregiver, only to discover that even her superhuman efforts can’t fix what’s wrong.
My Review

Wow! I wasn’t sure what to think of this one when I picked it up. It sounded interesting, but I didn’t know if it would hold my interest. It did!

This is a story of a young grandmother, who was widowed suddenly at a young age, and knows the struggles of single motherhood. Years later, with her children grown, she learns her daughter is about to experience a similar fate when her son-in-law is diagnosed with ALS, amyotrophic lateral sclerosis, a degenerative disease that ultimately results in death. (This is the disease commonly known as Lou Gehrig’s Disease). While death is certain, getting there is not pretty. As the person loses muscle function, he becomes completely reliant on others for his physical needs, including feeding, grooming, and transport. In this case, Tony, the son-in-law, becomes resentful and cruel to those close to him. This is understandable, of course, as he is facing a terminal diagnosis and resents having his needs attended to by his mother-in-law. But it isn’t easy for his family to live with. And at various times, they lash out at him and each other; a stressful situation for everyone.

There are some hard decisions to be made. Should Tony agree to go on a respirator when he can no longer breathe on his own? This will keep him alive, but unable to communicate his wishes if he ever decides enough is enough and he wants nature to take it’s course. Is it selfish of him to choose the respirator and extend the time his family must center their life around him? Is it selfish of them to want him to let go? Colleen also faces some difficult issues. Just how much does she owe her daughter? Is she obligated to remain indefinitely as Tony’s caretaker? Is it selfish for her to want to return to her life in Chicago? These are some of the ethical questions the book addresses. Book clubs will have a great time discussing these issues.

I highly recommend this book to anyone who enjoys family dilemnas. I have one copy to give away! If you would like to win a copy of Montpelier Tomorrow, just follow the link to fill out the entry form. Contest closes at midnight (central) September 17, 2015.

A former carpenter and mother of five, Marylee MacDonald began writing when her last child left for college. Her fiction has won the Jeanne Leiby Chapbook Award, the Barry Hannah Prize, the Ron Rash Award, the Matt Clark Prize, and the ALR Fiction Award. Her novel, Montpelier Tomorrow, was a Finalist in the 2014 IPPY Awards and the Faulkner-Wisdom Prize. She is widely published in literary magazines such as American Literary Review, Bellevue Literary Review, Folio, Blue Moon Literary & Art Review, Broad River Review, Four Quarters, New Delta Review, North Atlantic Review, Raven Chronicles, Reunion: The Dallas Review, River Oak Review, Ruminate, StoryQuarterly, The Briar Cliff Review, and Yalobusha Review.
Find out more about Marylee at her website, see what she’s pinning on Pinterest, and connect with her on Facebook and Twitter. You can also follow her blog and add her to your circles on Google+.