Review: The Rivals of Versailles 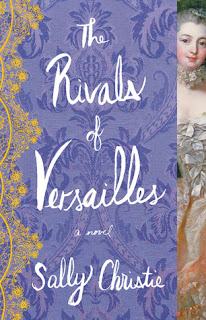 And you thought sisters were a thing to fear. In this compelling follow-up to Sally Christie's clever and absorbing debut, we meet none other than the Marquise de Pompadour, one of the greatest beauties of her generation and the first bourgeois mistress ever to grace the hallowed halls of Versailles.

I write this before her blood is even cold. She is dead, suddenly, from a high fever. The King is inconsolable, but the way is now clear.

The way is now clear.

The year is 1745. Marie-Anne, the youngest of the infamous Nesle sisters and King Louis XV's most beloved mistress, is gone, making room for the next Royal Favorite.

Enter Jeanne-Antoinette Poisson, a stunningly beautiful girl from the middle classes. Fifteen years prior, a fortune teller had mapped out young Jeanne's destiny: she would become the lover of a king and the most powerful woman in the land. Eventually connections, luck, and a little scheming pave her way to Versailles and into the King's arms.

All too soon, conniving politicians and hopeful beauties seek to replace the bourgeois interloper with a more suitable mistress. As Jeanne, now the Marquise de Pompadour, takes on her many rivals - including a lustful lady-in-waiting; a precocious fourteen-year-old prostitute, and even a cousin of the notorious Nesle sisters - she helps the king give himself over to a life of luxury and depravity. Around them, war rages, discontent grows, and France inches ever closer to the Revolution.

Enigmatic beauty, social climber, actress, trendsetter, patron of the arts, spendthrift, whoremonger, friend, lover, foe. History books may say many things about the famous Marquise de Pompadour, but one thing is clear: for almost twenty years, she ruled France and the King's heart.

Told in Christie's witty and modern style, this second book in the Mistresses of Versailles trilogy will delight and entrance fans as it once again brings to life the world of eighteenth century Versailles in all its pride, pestilence and glory.

I read and reviewed The Sisters of Versailles recently and LOVED it, so it was a no-brainer to pick this one up! However, once I agreed to review it, I began to worry. The Sisters of Versailles was so good, how could the second book possibly live up to the first?! I needn’t have worried — not only did this one live up to the high standard set by the first book, but if possible, it is even better! I really felt a connection to Madame de Pompadour that I just didn’t feel to any of the Nesle sisters, despite the fact that I loved the book!

I think it is important to address how The Rivals of Versailles will work as a ‘stand-alone’. You are probably wondering if you need to read The Sisters of Versailles to appreciate this one. The answer is no, this one works very well as a stand-alone if you jump right in. While some of the characters from the first book are mentioned in this one and some are recurring, there really is nothing that you need to know to enjoy this one. You can read this one as a stand-alone and never realize you missed the first one. BUT just because you can doesn’t mean you SHOULD read it as a stand-alone. The first one is too good to miss! So my recommendation is that you buy them both — and place an order for the third one while you are at it!

Another thing you will really want to do when you finish the book is pay a visit to the author’s website. She has included some of her research on these characters and it is fascinating to read.

Sally Christie was born in England of British parents but grew up mostly in Canada. As a child she moved around with her family and then continued her wandering as she pursued a career in international development; she’s lived in 14 different countries and worked in many more. She’s now settled in Toronto and loving it.

Sally lives and breathes history; ever since she read Antonia Fraser’s masterful Mary, Queen of Scots when she was 10, she’s been an avid history junkie. She wishes more attention and technical innovation was devoted to time travel, because there is nothing she would rather do than travel back in time! Writing historical fiction is a poor substitute, but it’s the best one we have at the moment.

When not reading and writing history, she’s a tennis and Scrabble fanatic.