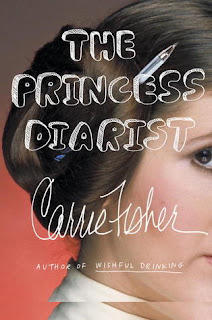 The Princess Diarist
by Carrie Fisher

Why did you choose this book? because….Star Wars
When did you read this book? January 2017
Who should read this book? Readers interested in Carrie Fisher
Source: library ebook
My Rating: ✰✰✰  3 Stars

Here is a synopsis of The Princess Diarist from Goodreads

The Princess Diarist is Carrie Fisher’s intimate, hilarious and revealing recollection of what happened behind the scenes on one of the most famous film sets of all time, the first Star Wars movie.

When Carrie Fisher recently discovered the journals she kept during the filming of the first Star Wars movie, she was astonished to see what they had preserved—plaintive love poems, unbridled musings with youthful naiveté, and a vulnerability that she barely recognized. Today, her fame as an author, actress, and pop-culture icon is indisputable, but in 1977, Carrie Fisher was just a (sort-of) regular teenager.

With these excerpts from her handwritten notebooks, The Princess Diarist is Fisher’s intimate and revealing recollection of what happened on one of the most famous film sets of all time—and what developed behind the scenes. And today, as she reprises her most iconic role for the latest Star Wars trilogy, Fisher also ponders the joys and insanity of celebrity, and the absurdity of a life spawned by Hollywood royalty, only to be surpassed by her own outer-space royalty. Laugh-out-loud hilarious and endlessly quotable, The Princess Diarist brims with the candor and introspection of a diary while offering shrewd insight into the type of stardom that few will ever experience.

I’m not usually a memoirs reader unless it involves a historical person, but when I heard about this diary written by Carrie Fisher during the filming of Episode IV of Star Wars….well, Princess Leia is historical enough! I hadn’t actually made time to read it until the tragic loss of Carrie Fisher in December. Then it seemed much more important to me that I read it, and read it soon.

The book was kind of a mixed bag for me. There were three parts to the book; a narrative written recently by Ms. Fisher telling of the days leading up to her role as Princess Leia and her time spent on the set and off with Harrison Ford, the actual diary, and another narrative analyzing post-Star Wars Carrie Fisher. I enjoyed the first part very much as Carrie told of her audition and her experiences of being in her first lead role in a movie. I also enjoyed the last part where Carrie came to terms and embraced being forever the Princess. What was not so interesting for me was the actual diary. It seemed choppy and rambling with many incomplete sentences. But of course, that is what a diary is; a person’s personal musings on the events of the day. It was not written for publication or judgement by anyone.

The book was also a little  bittersweet. At one point Carrie joked that she would die of embarrassment if anyone ever read her diaries and more than once she spoke of her death or obituary, though always in what seemed that she was referring to the distant future.

I didn’t love this book; it IS a memoir, after all. But as a Star Wars fan I enjoyed it, and I’m glad I read it. If you love all things Star Wars, you will want to read it, too!