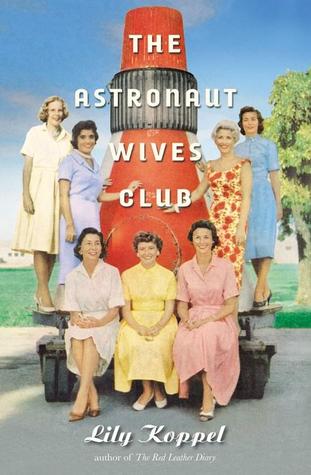 Why did you choose this book? I recently visited Titusville
When did you read this book? April 2014
Who should read this book? readers who enjoy biography and memoirs
Source: library ebook
Here is a synopsis of The Astronaut Wives Club from Goodreads

As America's Mercury Seven astronauts were launched on death-defying missions, television cameras focused on the brave smiles of their young wives. Overnight, these women were transformed from military spouses into American royalty. They had tea with Jackie Kennedy, appeared on the cover of Life magazine, and quickly grew into fashion icons.

Annie Glenn, with her picture-perfect marriage, was the envy of the other wives; platinum-blonde Rene Carpenter was proclaimed JFK's favorite; and licensed pilot Trudy Cooper arrived on base with a secret. Together with the other wives they formed the Astronaut Wives Club, meeting regularly to provide support and friendship. Many became next-door neighbors and helped to raise each other's children by day, while going to glam parties at night as the country raced to land a man on the Moon.

As their celebrity rose-and as divorce and tragic death began to touch their lives-they continued to rally together, and the wives have now been friends for more than fifty years. THE ASTRONAUT WIVES CLUB tells the real story of the women who stood beside some of the biggest heroes in American history.

I really enjoyed this book. I had planned to read it when it first came out, because most of the events took place during my childhood and I have vague memories of the ‘space race’. I even dreamed of being an astronaut when I grew up. I never got to the book, but when I took a recent trip to TItusville, across the river from Cape Canaveral and the Kennedy Space Center, I took the audiobook along to listen to on the drive. We ended up not listening to it, but when I got home, the next time I went to the library, the book practically jumped off the shelf into my hands, and convinced me it is time to read the book.

I am so glad I read it! The book started out a little slow, as there were so many people to be introduced to. But once I got into it and learned who and how everyone was related, I could hardly put the book down! Reading this book brought back a lot of memories of the awe I felt as a child watching the launches on TV. It also gave me some details of which I was not aware, which was interesting from the historical standpoint. But even more, the book was the story of the ‘space race’ from the point of view of the wives. It told a personal story, almost a collective memoir, with the history of the space race as a back drop. There were many emotions revealed by the wives, including anger, and joy, and pride.

While I enjoyed reading the stories, even more, I enjoyed the photos! It was like looking through a family album. I returned to the photo section many times as I read the book and learned more about each family. I read this as an ebook, but this is one time the print copy would be an advantage.

Here is a trailer with the author discussing her book.