Review: The Long and Faraway Gone 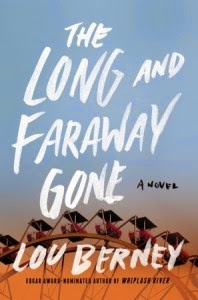 The Long and Faraway Gone
by Lou Berney

In the summer of 1986, two tragedies rocked Oklahoma City. Six movie-theater employees were brutally killed in an armed robbery. Then a teenage girl vanished from the annual state fair. Neither crime was ever solved.

Twenty-five years later, the reverberations of those unsolved cases continue to echo through the lives of those devastated by the crimes. Wyatt, the one teenage employee who inexplicably survived the movie-theater massacre, is now a private investigator in Las Vegas. A case unexpectedly brings him back to a hometown and a past he’s tried to escape—and drags him deeper into the harrowing mystery of the movie-house robbery that left six of his friends dead.

Like Wyatt, Julianna struggles with the past—specifically the day her beautiful older sister, Genevieve, disappeared at the fair. When Julianna discovers that one of the original suspects has resurfaced, she’ll stop at nothing to find answers.

As Wyatt’s case becomes more complicated and dangerous, and Julianna seeks answers from a ghost, their obsessive quests not only stir memories of youth and first love, but also begin to illuminate dark secrets of the past. Even if they find the truth, will it help them understand what happened and why they were left behind that long and faraway gone summer? Will it set them free—or ultimately destroy them?

I don’t normally read a lot of thrillers, but this seems to be my year for them, and this is a good one! The cover definitely pulled me into this book. There is something about that font….I like the faded paint look. The fact that the story is set in Oklahoma City also pulled me in. I’ve been through there a few times in the past two years, and while I can’t say I know the area well, I was able to picture different places mentioned in the story, for example, I could visualize drive from Oklahoma City to Norman.

The story is told from alternating points of view; Wyatt, now a private detective, is the sole survivor of a mass murder that occurred in the theater where he worked as a teen. Julianna, a nurse, is the surviving sister of a teen girl who vanished from the Oklahoma State Fair just weeks after the theater shooting. One thing that surprised me about the book is that these are parallel stories being told at the same time, but very little interaction occurs between the two main characters, and when it does, it is relatively insignificant!

Both characters are seeking resolution; they want answers to the questions they have about the crimes committed all those years ago. Their quests to solve these mysteries puts them in danger at times and leads to plenty of suspense! There are enough twists and turns to keep you turning the pages. But this book is not really about the mysteries to be solved; it is about the people working to solve the mysteries and the effects those crimes have on them even years later.

I really liked the character of Wyatt and especially liked his relationship with his elderly Uncle Pete. Wyatt is smart, considerate, and charming. Julianna...not so much. She is a bit self-absorbed and got pretty annoying at times. She was also prone to making some very poor choices, the kind that just leaves you thinking ‘did you really just do that?!’ It made me glad that there was little interaction between Wyatt and Julianna.

I did like the way the story was resolved, even though it left a lot of things open for the two main characters. If you read my blog often, you know that I am a big fan of epilogues. But in this instance, I didn’t feel the need to know what happens years into the future. The book ends with thoughts from one of Wyatt’s murdered co-workers and from Julianna’s sister, but for me, these didn’t add anything to the story and could have been left omitted. Overall, I really enjoyed this book and think that if you enjoy mysteries and suspense, you will enjoy it, too!

Lou Berney is an accomplished writer, teacher, and liar who has written feature screenplays and created TV pilots for Warner Brothers, Paramount, Focus Features, ABC, and Fox, among others. His short fiction has appeared in the NewYorker, Ploughshares, the Pushcart Prize anthology, and other publications. His first novel, Gutshot Straight, was named one of the ten best debut crime novels of the year by Booklist and nominated for a Barry Award.