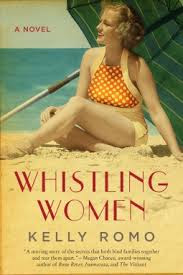 Why I chose this book? Look at the cover!
When I read this book? December 2015
Who should read this book? readers of early 20th century period fiction
Source: TLC Book Tours
Here is a synopsis of Whistling Women from Goodreads

Life went terribly wrong for Addie Bates in San Diego, and she’s been running from dark memories ever since. For fifteen years, the Sleepy Valley Nudist Colony has provided a safe haven for Addie to hide from the crime she committed. But when the residents pack up to go on exhibit at the 1935 world’s fair in San Diego, Addie returns and must face the thrilling yet terrifying prospect of reuniting with her estranged sister, Wavey.

Addie isn’t the only one interested in a reunion. When her niece, Rumor, discovers she has an aunt, Rumor is determined to bring her family together. But it’s not so easy when the women are forced to confront family secrets, past and present.

Set against the backdrop of the 1935 world’s fair, Whistling Women explores the complex relationships between sisters, the sacrifices required to protect family, and the devastating consequences of a single impulsive act.

This was a mixed bag for me. There was a lot going on in this story; maybe just a little too much. It took me a long time to feel that I was involved with the story. I read through about the first sixty pages without really knowing where the story was going and how events were related, to the point that I forgot some of the facts that were giving early in the story before they ever came into play. I will say, though, that once the story got going, I enjoyed it, and everything came together nicely.

One thing I really enjoyed was the tie-in with the  1935 San Diego World’s Fair and the Zoro Garden nudist colony. The way the nude women were put on display and coached to put on a show and exhibit themselves for the entertainment of the fair visitors reminded me very much of the exploitation of the Filipino tribe in The Lost Tribe of Coney Island.

One thing I was not happy with, which will come as no surprise to regular readers of this blog, was the lack of an epilogue catching us up with the lives of the characters a few years down the road. There were a lot of loose ends, and without an epilogue I really wonder if some of the events could have been left out, as they seemed to have no real bearing on the story. Another thing I wasn’t so happy with was the lack of consequences for some of the characters for their actions. Although truthfully, had they suffered the consequences, I may also have been unhappy as I really did like the characters.

While I thought the book was a bit too unfocused at the beginning and included things that really weren’t necessary to move the story along, I really did enjoy the book. This will make a good book club selection with topics to discuss ranging from the exploitation of these women, the morality issues of the day, and domestic abuse, among others. Kelly A. Romo currently lives in Oregon with her three children where she teaches writing, literature, and social studies. She loves the outdoors; hiking, kayaking, and camping. Kelly grew up in California running around with all her thrill-seeking cousins and siblings; jumping off cliffs into the Colorado River, exploring caves on the beaches of Mexico, riding dirt bikes, water skiing, and snow skiing.