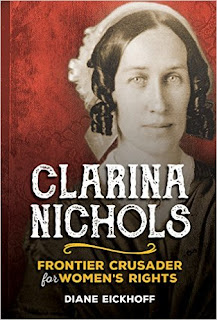 Why I chose this book? a biography about an important woman I didn’t know
When I read this book? March 2016
Who should read this book? readers interested in strong women in history
Source: TLC Book Tours
Here is a synopsis of Clarina Nichols from Goodreads

Everyone knows about the ''Votes for Women'' campaign that led to the 19th Amendment in 1920. Few know just how long the struggle really was. Decades earlier, brave women began breaking the taboo of remaining silent at gatherings that included men. They began signing their names to petitions, flexing political muscle long before they had the vote. They wrote millions of words and published some of the most influential books and journals of their day. No one represents this early struggle -- the small triumphs and discouraging setbacks -- better than Clarina Howard Nichols (1810-1885), the Vermont newspaper publisher whose speeches made a powerful case for equality.

Nichols, herself the victim of a failed marriage, was a magnet to abused and mistreated women and was their advocate at a time when her sex was just beginning to speak up. And when she felt progress wasn't coming soon enough, she moved west, to Bleeding Kansas, where she would make history and show the world that feminism could thrive on the frontier.

Diane Eickhoff, who first wrote Nichols' biography in 2006 as Revolutionary Heart, has reimagined her story for all ages. Booklist declared, ''The name Clarina Nichols deserves to be placed next to those of such luminaries as Susan B. Anthony and Elizabeth Cady Stanton,'' and readers of this inspiring historical biography will heartily agree.

I picked this one up because I enjoy history and I especially enjoy learning about events I was not previously aware of. This is a biography of a woman, Clarina Nichols, who was very important to the early days of the women’s movement. This was a very appropriate read for March, the month designated as Women’s History Month.

One this I really enjoyed was the book itself — the physical book! This is a book geared towards middle school readers and as I read it, I felt nostalgic. This book reminded me very much of books I’d read as a young girl. I’m a big fan of dust covers and this one is very nice, but when I took of the dust cover (I don’t like to read with dust covers on!) I was pleasantly surprised by the look of the book. The embossing on the spine and the texture on the covers gives this book a very vintage feel! The pages also felt familiar with the very readable font and the illustrations marking the beginning of a new section. There were also plenty of historical photos to keep my interest!
Another thing I really enjoyed about this book is that I came across many of the characters I’d just met in the book I read just before this one for my book club, The Invention of Wings. That one was about Sarah Grimké and her sister, Angelina, who were also abolitionists and activists for the rights of women. Clarina’s daughter attended their school!

While the reader will learn about the life of Clarina Nichols from this book, there is much more to learn, including the hardship and courage settlers faced as they headed west, and why is was so important for women to demand their rights. I’m pretty sure young women today have no idea how difficult life was for their great-grandmothers and how dependant they were on the goodwill of men.
I am so happy I came across this book. If you have daughters, consider purchasing a copy for them, and maybe an extra copy for the school library!

Diane Eickhoff grew up on a farm in Minnesota, taught school in Appalachia and New York, and helped edit a newspaper for an anti-poverty program in Alabama. She has written widely for publications aimed at high school and younger readers. Her biography, Revolutionary Heart, from which this book is adapted, was named a Kansas Notable Book and the winner of ForeWord magazine’s Book of the Year competition in biography, among other honors. She lives with her husband, author Aaron Barnhart, in Kansas City.