Review: The Only Woman In The Room 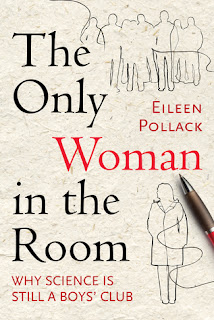 The Only Woman In The Room
by Eilleen Pollack

Why did you choose this book? A book about women and sciende
When did you read this book? March 2017
Who should read this book? People who enjoy memoirs
Source: Library Thing Early Reviewers
Here is a synopsis of The Only Woman In The Room from Goodreads

A bracingly honest exploration of why there are still so few women in the hard sciences, mathematics, engineering, and computer science

In 2005, when Lawrence Summers, then president of Harvard, asked why so few women achieve tenured positions in the hard sciences, Eileen Pollack set out to find the answer. In the 1970s, Pollack had excelled as one of Yale’s first two women to earn a bachelor of science degree in physics. But, isolated, lacking in confidence, and starved for encouragement, she abandoned her lifelong dream of becoming a theoretical physicist. Years later, she thought back on her experiences and wondered what had changed in the intervening decades, and what challenges remained. Based on six years of interviewing dozens of teachers and students and reviewing studies on gender bias, The Only Woman in the Room is an illuminating exploration of the cultural, social, psychological, and institutional barriers confronting women in the STEM disciplines. Pollack brings to light the struggles that women in the sciences are often hesitant to admit and provides hope that changing attitudes and behaviors can bring more women into fields in which they remain, to this day, seriously underrepresented.

Eileen Pollack is the author of the novels Breaking and Entering (a New York Times Editor’s Choice selection) and Paradise, New York, as well as two collections of short fiction, an award-winning book of nonfiction, and two creative-nonfiction textbooks. Her work has appeared in Best American Essays and Best American Short Stories. She is a professor on the faculty of the Helen Zell MFA Program in Creative Writing at the University of Michigan. She divides her time between Manhattan and Ann Arbor, Michigan.

It’s taken me a long time to get to the point where I can write a review of this book and not a lengthy rebuttal, because this is a book that caused me to shake my head frequently. I went through school just a few years before this author, and I have to say, my experiences as a science major were nothing like hers! I could go on, but…

I think the main thing to know about this book is that despite the synopsis, this is not really a study or analysis of the role of women in science and how that may have changed. This is really a memoir about the author’s experience as a science major and her explanations for her failed expectations. Ellen grew up thinking she wanted to be a scientist, but for all the wrong reasons. Though she never seems to realize this herself, her passion is not science, but is writing. Her motivation for studying science at an ‘elite’ university seems to be that it makes her feel like she is better than the ‘common’ people. Obviously she feels that writers are second class citizens compared to scientists. Her arrogance and elitism really annoyed me, particularly when she mentioned a ‘public Midwest university’ with a tone of disdain.

Another thing that was extremely annoying to me was that she assigned her difficulty with math to the prevalence of sports-related examples in math books. She seems to imply that interest in sports is gender-based, which I assume we all know is not true — at all!

If you enjoy memoirs, you may enjoy this one, but it is important to realize that this is a story of one woman’s experiences in her quest to become a scientist, and the way she has dealt with the might-have-been and if-only. The experiences should not be generalized or assumed to reflect the experiences of all, or even most, women. If you are looking for that book you need to keep looking!

I received a review copy of this book through the Library Thing Early Reviewers program.