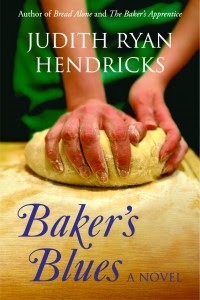 Why did you choose this book? the synopsis was interesting
When did you read this book? August 2015
Who should read this book? readers who enjoy ‘foodie’ fiction
Source: TLC Book Tours
Here is a synopsis of Baker’s Blues from Goodreads

In Wyn Morrison’s world a 5 A.M. phone call is rarely good news. It usually means equipment trouble at her bakery or a first shift employee calling in sick—something annoying but mundane, fixable. But the news she receives on a warm July morning is anything but mundane. Or fixable.

Mac, her ex-husband, is dead.

He’s not just in a different house with another woman, but actually, physically gone. Ineligible for widowhood, Wyn is nonetheless shaken to her core as she discovers that the fact of divorce offers no immunity from grief.

As Mac's executor, Wyn is now faced with not only sorting his possessions and selling the house, but also with helping his daughter Skye deal with financial and legal aspects of the estate--a task made more difficult by Skye’s grief, anger and resentment.

Ironically, just when Wyn needs support most, everyone she’s closest to is otherwise occupied. Her mother and stepfather have moved to Northern California, her best friend CM has finally married the love of her life and is commuting to New York, and her protégé Tyler is busy managing the bakery and dealing with her first serious love affair. They’re all sympathetic, but bewildered by her spiral into sadness. After all, it’s been three years since the divorce.

On her own, she stumbles at first. For the last several years Wyn has been more businesswoman than baker, leaving the actual bread making to others. Now, as she takes up her place in the bread rotation once more, she will sift through her memories, coming to terms with Mac and his demons, with Skye’s anger, and with Alex, who was once more than a friend. Soon she will re-learn the lessons that she first discovered at the Queen Street Bakery in Seattle…that bread is a process--slow, arduous, messy, mysterious--and best consumed with the eyes closed and the heart open.

I picked this one up because the synopsis sounded so interesting. If you enjoy ‘foodie’ fiction, you should enjoy this one. I could almost smell the yeast and flour and the baking bread as I read this….and it made me hungry! I also really enjoyed the food scenes when Wyn’s friend and fellow restaurant owner prepared dinners for her.

As the story opens, Wyn’s ex-husband, Mac, has just died in a drowning accident, and in this book, she retraces her time with him. She also helps his daughter, Skye, deal with the loss of the father she didn’t get to know until she was about 16.

This book was an emotional read, and at times a bit depressing. We really get to see how depression affects not only the person suffering from depression, but also those close to him. It was difficult to watch Mac go through this. I really didn’t like him very much through much of the book, though that changed as I got to know him.

This is the third book in a series, and though it works as a stand-alone, I highly recommend you pick up the first two books first. I really think I would have enjoyed the book more if I’d known the background story of how Wyn came to own the bakery. I also think I may have liked Mac better from the beginning had I read the previous books. As it was, I felt a bit like Skye must have felt, wishing I’d known Mac before his depression took over.

Judith Ryan Hendricks was born in San Jose, California, when Silicon Valley was the Santa Clara Valley, better known for orchards than for computer chips.
Armed with a degree in journalism, she worked as a journalist, copywriter, computer instructor, travel agent, waitress and baker before turning to fiction writing. Her experiences at the McGraw Street Bakery in Seattle led to her first novel, Bread Aloneand the sequel, The Baker’s Apprentice.
A life-long infatuation with the Southwest provided inspiration for Isabel’s Daughter and her fourth book, The Laws of Harmony. Hendricks’ fiction has been translated into 12 languages and distributed in more than 16 countries worldwide.
Her nonfiction has appeared in The San Francisco Chronicle and Tiny Lights, A Journal of Personal Essay, Grand Gourmet in Italy and The London Sunday Express. Her short fiction has appeared in Woman’s Weekly in Britain and AMERICAN GIRLS ON THE TOWN, an anthology, in the U.S. and U.K.
She lives in New Mexico with husband Geoff and dog Blue.
Connect with Judi at her website, judihendricks.com.